Why Saturn’s atmosphere is so hot?

Its heat source has been one of the great mysteries of planetary science. 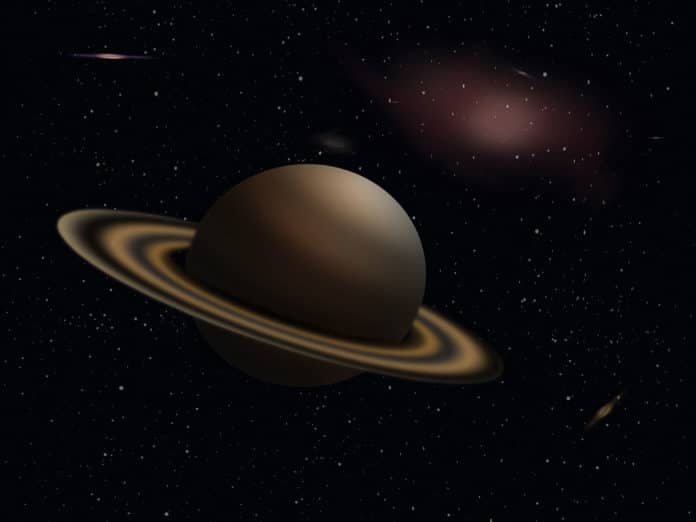 Like Earth, the upper layers of planets like Saturn, Jupiter, Uranus, and Neptune are so hot. But, unlike earth- all these planets are so far from the sun to account for the high temperatures. Thus, their heat source remains a mystery.

NASA’s Cassini spacecraft has now come up with a possible explanation. The data answered what’s keeping the upper layers of Saturn, and possibly the other gas giants, so hot.

According to NASA‘s Cassini spacecraft, auroras at the planet’s north and south poles play a vital role. Enough energy is deposited at auroral regions to heat the entire thermosphere, but models predict that strong Coriolis forces and ion drag inhibit equatorward distribution.

Electric currents, triggered by interactions between solar winds and charged particles from Saturn’s moons, spark the auroras and heat the upper atmosphere.

This new study is the detailed yet complete mapping of both temperature and density of a gas giant’s upper atmosphere—a region that has been poorly comprehended.

Through this study, scientists can better comprehend how auroral electric currents heat the upper layers of Saturn‘s atmosphere and drive winds.

The global wind system can disseminate this energy, which is at first stored close to the poles toward the equatorial regions, heating them to double the temperatures anticipated from the sun’s heating alone.

Zarah Brown, a lead author of the study and a graduate student at the University of Arizona Lunar and Planetary Laboratory, said, “Understanding the dynamics requires a global view. This dataset is the first time we’ve been able to look at the upper atmosphere from pole to pole while also seeing how temperature changes with depth.”

Study co-author Tommi Koskinen, a member of Cassini’s Ultraviolet Imaging Spectrograph team, said, “The results are vital to our general understanding of upper planetary atmospheres and are an important part of Cassini’s legacy. They help address the question of why the uppermost part of the atmosphere is so hot, while the rest of the atmosphere—due to the large distance from the Sun—is cold.”

Cassini targeted several bright stars in the constellations of Orion and Canis Major as they passed behind Saturn. As the spacecraft observed the stars rise and set behind the giant planet, scientists analyzed how the starlight changed as it passed through the atmosphere.

Estimating how dense the atmosphere is, gives scientists the information they expected to discover the temperatures. Density diminishes with altitude, and the rate of decline relies upon temperature. They found that temperatures peak near to the auroras, demonstrating that auroral electric currents heat the upper atmosphere.

Brown said, “Even though thousands of exoplanets have been found, only the planets in our solar system can be studied in this kind of detail. Thanks to Cassini, we have a more detailed picture of Saturn’s upper atmosphere right now than any other giant planet in the universe.”

Saturn’s rings and tilt could be the product of an ancient, missing moon