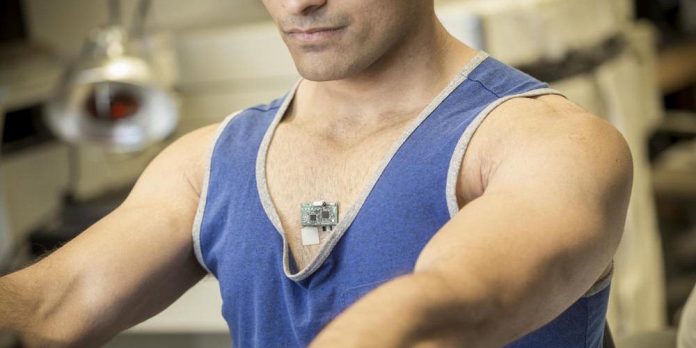 Nowadays, wearable technology taking place in various sectors like computing, medical, etc. Wearable technology is nothing but the electronic gadgets that can wear on the body. It may be like an accessory or clothing material embedded with smart sensors. Wearable technology now becoming famous as like as smartphones, mobile applications, and computing. One of its major features is hands-free monitoring some of the most appealing application of it is of artificial intelligence and big data.

Well, there is also a new wearable device invented by researchers from the University of California San Diego. This device is the first flexible device that can detect both biochemical and electrical signals inside the human body.

This device is known as Chem-Phys patch. It consists of a flexible set of sensors and a small electronic board. This Chem-Phys patch a flexible wearable device record electrocardiogram (EKG: the process of recording the electrical activity of the heart over a period of time using electrodes placed on the skin). Heart signals and track lactate levels (a biochemical that is a marker of tangible effort in real time).

The device which is known as Chem-Phys patch can be worn on the chest. It establishes communication wirelessly with the help of a smartphone, smartwatch or computing devices. It can also transmit the data from biochemical and electrical signals along with Bluetooth.

Nano-engineers and electrical engineers from the University of California worked combined to build up the device. Their goal was to build such kind of wearable tricorder-like device that can measure an overall set of chemical, physical and electrophysiological signals constantly during the day. After that, the team’s biggest task was making sure that signals from two different sensors could not interfere with each other.

This new tiny wearable device was actually made by screen printing onto a thin, flexible polymer sheet. An electrode to sense lactate was printed in the center of the patch, with two EKG electrodes bracketing it to the left and the right. The researchers also had to make sure the EKG sensors were isolated from the lactate sensor. Researchers added a printed layer of soft water-repelling silicone rubber to the patch and configured it to keep the sweat away from the EKG electrodes, but not the lactate sensor.

After that the sensor connected to a small custom printed circuit board equipped with a microcontroller and a Bluetooth Low Energy chip.

Dr. Kevin Patrick, a physician and director of the Centre for Wireless and Population Health Systems at UC San Diego, explained, “The ability to sense both EKG and lactate in a small wearable sensor could provide benefits in a variety of areas. There would certainly be interest in the sports medicine community about how this type of sensing could help optimize training regimens for elite athletes. The ability to concurrently assess EKG and lactate could also open up some interesting possibilities for preventing and/or managing individuals with cardiovascular disease.”

This patch was tested on three different males. Researchers ask them to wear the device on their chest, alongside the base of their Sternum (the breast bone) during doing 15 to 30 minutes of continuous activity on a stationary bike. After this, scientists get an outcome as data collected by the EKG electrodes on the patch approximately similar with the data collected by a commercial wristband. The locate biosensor collects the data during increasing intensity workouts in other studies.

Patrick Mercier, Professor at University of California Sn Diego said, “One of the overarching goals of our research is to build a wearable tricorder-like device that can measure simultaneously a whole suite of chemical, physical and electrophysiological signals continuously throughout the day.”

“This research represents an important first step to show this may be possible.”

Transforming our body into a battery