Snowball Earths were likely the product of rate-induced glaciations 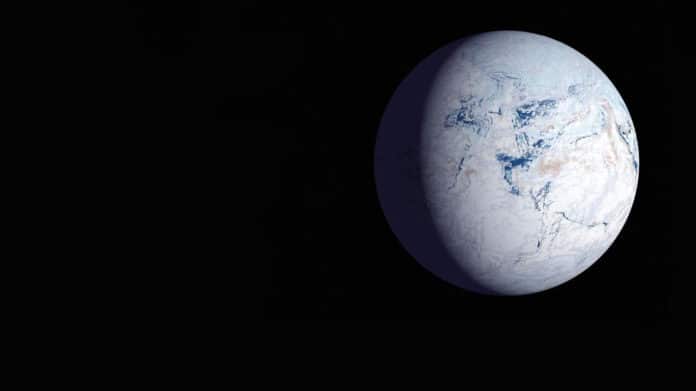 Palaeoclimate evidence suggests that the Earth has undergone several episodes of low-latitude glaciation in the geologic past.

Not only once, but twice, the Earth was encased in a sheet of snow and ice. This dramatic event is known as the Snowball Earth event that occurred around 700 million years ago. Regardless of how far the ice stretched, most scientists agree that the Snowball formed suddenly.

Now, MIT scientists suggest that Snowball Earth caused by rate-induced glaciations. In their study, they found that Earth can be tipped into a global ice age when the level of solar radiation it receives changes quickly over a geologically short period. The amount of solar radiation doesn’t have to drop to a particular threshold point; as long as the decrease in incoming sunlight occurs faster than a critical rate, a temporary glaciation, or Snowball Earth, will follow.

The discovery proposes that whatever caused the Earth’s ice ages most likely included procedures that immediately decreased the amount of solar radiation rising to the top, for example, across the board volcanic eruptions or organically prompted cloud formation that could have essentially blocked out the sun’s rays.

Global ice ages on Earth are impermanent, because of the planet’s carbon cycle. At the point when the earth isn’t covered in ice, levels of carbon dioxide in the atmosphere are to some degree constrained by the weathering of rocks and minerals. When the earth is covered in ice, weathering is vastly decreased, so carbon dioxide builds up in the environment, making a greenhouse effect that, in the end, defrosts the planet out of its ice age.

It is widely assumed that the cause of Snowball Earths is associated with the balance between incoming sunlight, the ice-albedo feedback, and the global carbon cycle.

Lead author Constantin Arnscheidt, a graduate student in MIT’s Department of Earth, Atmospheric and Planetary Sciences (EAPS), said, “There are lots of ideas for what caused these global glaciations, but they all boil down to some implicit modification of solar radiation coming in. But generally, it’s been studied in the context of crossing a threshold.”

For the study, scientists developed a mathematical model of the Earth’s climate system. The model consists of equations that represent relations between incoming and outgoing solar radiation, the surface temperature of the Earth, the concentration of carbon dioxide in the atmosphere, and the effects of weathering in taking up and storing atmospheric carbon dioxide. Tuning each of these parameters, scientists were able to observe which conditions generated a Snowball Earth.

The model shows that a planet was more likely to freeze over if incoming solar radiation decreased quickly, at a rate that was faster than a critical rate, rather than to a critical threshold, or a particular level of sunlight. Although, it remains unclear what that significant rate would be.

Arnscheidt estimates that the Earth would have to experience about a 2 percent drop in incoming sunlight over about 10,000 years to tip into a global ice age.

The findings may also apply to the search for life on other planets. Scientists have been keen on finding exoplanets within the habitable zone — a distance from their star that would be within a temperature range that could support life. The new study suggests that these planets, like Earth, could also ice over temporarily if their climate changes abruptly. Even if they lie within a habitable zone, Earth-like planets may be more susceptible to global ice ages than previously thought.

Webb reveals an exoplanet atmosphere as never seen before