Carbon emissions contribute to climate change, which can have serious consequences for humans and their environment. Carbon emissions, in the form of carbon dioxide, make up more than 80 percent of the greenhouse gases emission.

Though, scientists are consistently working on technologies that use carbon dioxide (CO2), a greenhouse gas, as a resource. But, effective technologies have not been proposed owing to the low-efficiency conversion rate and high energy requirements.

In a recent study, UNIST scientists have developed a new technology that generates electricity and hydrogen by completely removing carbon dioxide (CO2). They have developed Hybrid Na-CO2 cell that can continuously produce electrical energy and hydrogen with a stable operation for over 1,000 hr from spontaneous CO2 dissolution in aqueous solution. 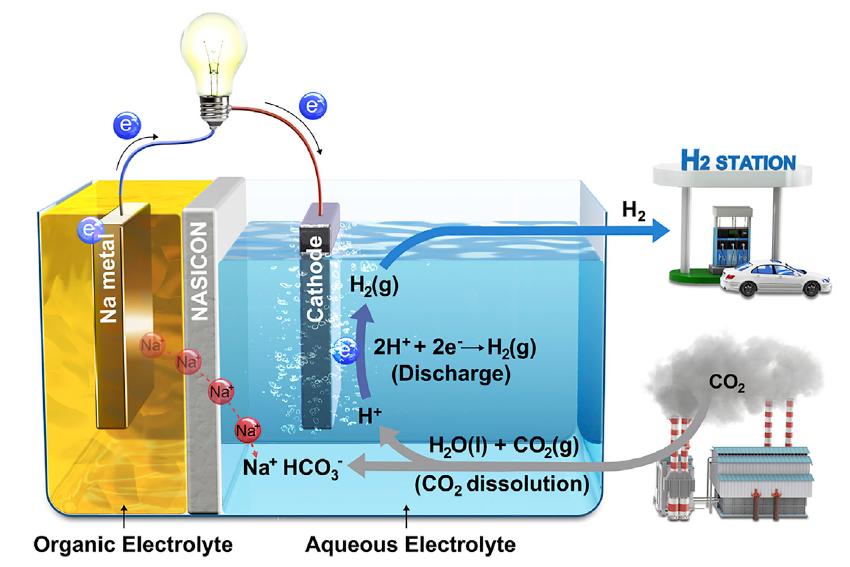 Professor Guntae Kim in the School of Energy and Chemical Engineering at UNIST said, “Carbon capture, utilization, and sequestration (CCUS) technologies have recently received a great deal of attention for providing a pathway in dealing with global climate change. The key to that technology is the easy conversion of chemically stable CO2 molecules to other materials. Our new system has solved this problem with CO2 dissolution mechanism.”

Oceans absorbed most of the CO2 and generates acidity. By focusing on this fact, scientists come with an idea of melting CO2 into the water to induce an electrochemical reaction.

On the off chance that acidity increases, the quantity of protons increases, which thus increases the ability to attract electrons. Creating a battery system based on this phenomenon could lead to electricity production by removing CO2.

This newly developed Hybrid Na-CO2 System is much similar to a fuel cell that composed of a cathode (sodium metal), a separator (NASICON), an anode (catalyst). Unlike other batteries, catalysts are contained in water and are connected by a lead wire to a cathode.

When CO2 is injected into the water, the entire reaction gets started, eliminating CO2 and creating electricity and H2. At this time, the conversion efficiency of CO2 is high at 50%.

During experiments, scientists found that the system has shown stability to the point of operating for more than 1,000 hours without damage to electrodes. The system can be applied to remove CO2 by inducing voluntary chemical reactions.

Jeongwon Kim in the Combined M.S/Ph.D. in Energy Engineering at UNIST said, “This hybrid Na-CO2 cell, which adopts efficient CCUS technologies, not only utilizes CO2 as the resource for generating electrical energy but also produces the clean energy source, hydrogen.”

“This research will lead to more derived research and will be able to produce H2 and electricity more effectively when electrolytes, separator, system design, and electrocatalysts are improved.”

The study is published in the journal iScience.