Killing three birds with one stone.

In a new study, scientists at the UNIST have uncovered a new method that converts discarded eggshells into hydrogen. Their novel method holds the potential to become innovative and alternative energy for the future.

During the study, scientists introduced a mechanism of a selective catalytic reaction. They also presented an environmentally friendly approach for the energy‐efficient conversion of alcohols into valuable products (graphene and H2).

They successfully generated calcium oxide (CaO) with calcium carbonate (CaCO3) (the main ingredient of an eggshell) and found that it can be used as a catalyst for the production of hydrogen and graphene.

The use of CaO as a catalyst allowed the reaction to proceed at a lower temperature than that of conventional catalysts and produced hydrogen that could be used without any separation process. In the course of the reaction, a thin layer of carbon (C) is deposited on the calcium oxide to form the graphene, which can be easily peeled off by simple handling. 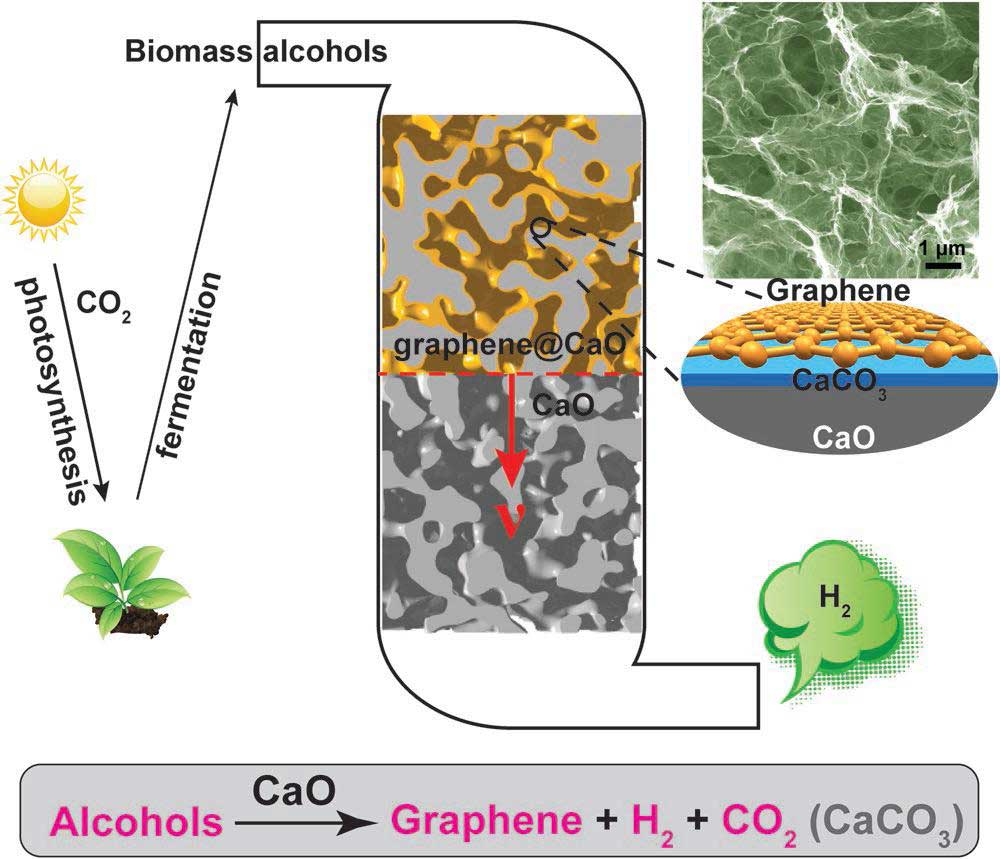 Professor Jong‐Beom Baek and his research team in the School of Energy and Chemical Engineering at UNIST explained, “Alcohol is obtained by fermenting plants and microorganisms, so it is an eco-friendly energy source that can continue to be mass-produced in the future. Since the alcohol component is hydrogen, carbon, oxygen, it can be converted to other useful forms.”

“Already a high temperature of over 700°C has been used to convert steam into hydrogen and carbon-based materials. However, in addition to hydrogen, by-products such as methane, carbon monoxide, and ethylene are generated at a high temperature of 700°C or higher. Therefore, it is necessary to select only the hydrogen from the produced gas, and the hydrogen production unit price is also increased.”

Scientists solved the disadvantages of hydrogen production by making use of alcohol as a catalyst. The reaction temperature was brought down to 500°C by utilizing calcium oxide produced using eggshells. Accordingly, 99% of the created gas was hydrogen, and BNPGr was delivered in a ready-to-use state when the catalyst was evacuated with acid.

Professor Baek said, “Calcium oxide is an inexpensive material and it is environmentally friendly because it can be made from recycled egg shells. Both hydrogen and graphene are economical because they can be used without any separation process.”

In other words, the newly devised method which is used as a catalyst for the conversion of alcohol to hydrogen is used for the synthesis of graphene on the shell after the reaction. This technique of producing value‐added graphene and pure hydrogen, while recycling food waste is a way to ‘kill three birds with one stone’.

Dr. Gao-Feng Han (School of Energy and Chemical Engineering, UNIST), who led the study as the first author heated the eggshells to produce CaO and used it as a catalyst for the steam reforming reaction of alcohol. In addition, he also resolved the principle, in which alcohol is converted to hydrogen and graphene, as well as the role for CaO in this process.

He said, “The steam reforming method of alcohol using calcium oxide will have the same effect on the commercial environment where the reaction proceeds on a much larger scale. We hope that the results of this study will help us to recycle bioresources, including ethanol.”

This study has been jointly participated by Professor Qing Jiang and Zhi-Wen Chen from Jilin University in Changchun, China. The findings of this research have been published in the April 2019 issue of Advanced Materials.

A new approach to artificial photosynthesis