Researcher discusses the mystery of why we sleep

Poor sleep can badly affect health but we still do not understand the purpose of sleep, said an Imperial researcher at a recent talk.

Poor sleep quality can cause you to feel groggy the next day and may even be linked to an increased risk of Alzheimer’s disease. But determining the quality of your sleep is less straightforward than counting the number of hours you get.

He was joined by Professor Mary Morrell, Professor of Sleep and Respiratory Physiology at the National Heart and Lung Institute, who discussed her work to grow new medications and innovations to treat obstructive sleep apnoea (OSA) in older patients.

Despite decades of studies on sleep, researchers can’t agree on the purpose of sleep. 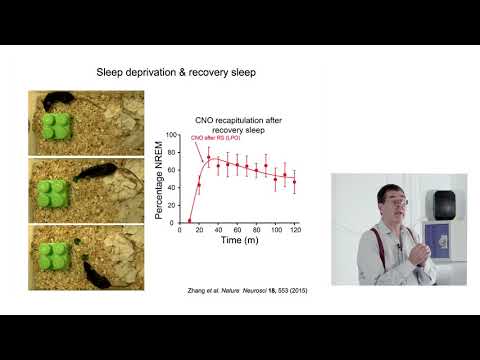 Professor Nick said, “It’s astonishing that we still don’t yet know why we sleep. Research has shown the effects of poor sleep, such as reduced mood and concentration as well as increasing the risk of serious conditions such as obesity, heart disease, and diabetes. There are many different theories as to why we need to sleep and at Imperial we are exploring and developing our theories so we can potentially develop new ways of treating a range of diseases linked to poor sleep.”

While speaking, he also talked about different studies on the importance of sleep. One study suggested that sleep is necessary to reset connections between brain cells and process information from the previous day.

He then discussed another study suggesting that sleep is essential for clearing damaged proteins and waste from the brain. This insight could lead to new ways of treating a range of diseases that may be linked to poor sleep, such as dementia.

Professor Franks says that with about 24 hours of sleep deprivation, people’s performance was impaired to a similar extent to that seen in people at the drink-driving limit.

The seminars are an example of the work carried out by Imperial College AHSC, a joint initiative between Imperial College London and three NHS hospital trusts. It aims to transform healthcare by turning scientific discoveries into medical advances to benefit local, national, and global populations in as fast a timeframe as possible.