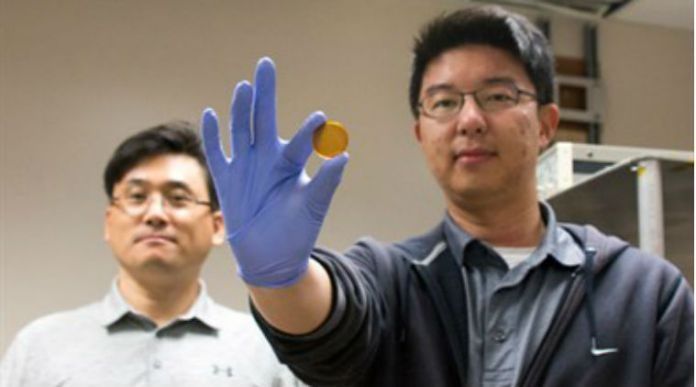 Wearable technology is now the hot topic with devices like the wrist watch, fitness band, skin patches, etc. With wearable technology, learning more about yourself has not only become high-tech but also real-time. Well, the wearable technology has the future that can’t be minimized and various scientists from different universities are doing the same. Similarly, scientists from the Texas A&M University have developed new technology that uses body heat to charge gadgets. It is a new concept of electrical energy storage. It’s known as Thermally Chargeable Solid-state Supercapacitor.

The supercapacitor is flexible in that enough and can be used as a power supply for wearable electronics.

Furthermore, it can be integrated into wireless data transmission systems to operate internet of things (IoT) sensors. In this solid-state supercapacitor, the concept of IoT is connecting various devices and sensors for data communication and exchange.

Choongho Yu, a professor at Texas A&M University said, “This is for the first time that it has been discovered that a solid-state polymer electrolyte can produce large thermally induced voltage. The voltage can then used to initiate an electrochemical reaction in electrodes for charging.”

Working of this Chargeable Solid-state Supercapacitor:

The solid-state supercapacitor works by transforming thermal energy into electric energy. For example, it charges through human body heat or any heat dissipating objects that change surrounding temperature.

Scientists have also used a physical phenomenon called Soret effect by using a solid-state polymer electrolyte. It is the phenomenon in mobile particle’s mixture, where the different particle types exhibit different responses to the force of a temperature gradient. Thus, temperature gradient with supercapacitor moves the ions from the hot side to the cold side generating the high thermally induced voltage.

Transforming our body into a battery