An electrode to improve the stability of the Perovskite Solar Cell

Enhancing the performance of PSCs with ‘Graphene Armor’. 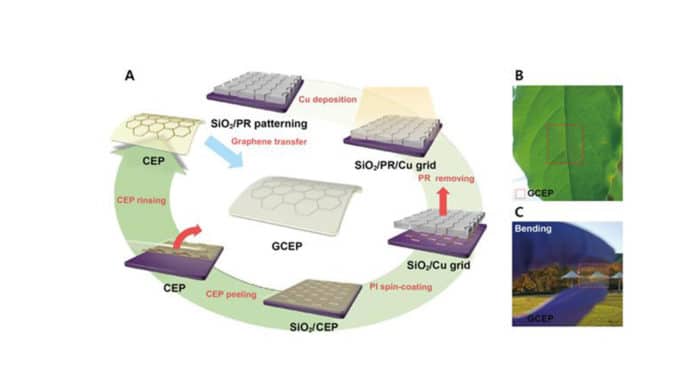 UNIST scientists have come up with a new electrode that could potentially improve the stability of the Perovskite Solar Cell. Scientists have developed a high-performance metal-based flexible transparent electrode with an interlayer of graphene.

Scientists used graphene with excellent impermeability, the metal-induced decomposition phenomenon, which has been identified as a chronic problem of metal-electrode-based perovskite solar cells, was suppressed to improve stability significantly.

Along with efficiency, the mechanical stability of the solar cell also increased.

Until now, metal oxide-based electrodes (ITO) were used, but they were hard and easily broken, making them difficult to apply to wearable devices. In particular, when this electrode is applied to a perovskite solar cell, there is a problem that the halogen element contained in the perovskite (photoactive layer) moves toward the metal oxide and the metal electrode and the photoactive layer are decomposed simultaneously.

Scientists solved this issue by adding a graphene layer. When graphene is inserted as an intermediate layer between the transparent metal electrode and the perovskite photoactive layer, electrons (charges), flow well but halogen elements cannot move. Also, graphene itself is open and flexible, so it is also suitable for use as an electrode for photoelectric devices.

Inserting metal-graphene hybrid flexible transparent electrode with an interlayer of graphene to perovskite solar cells increased photoelectric conversion efficiency to 16.4%. What’s more, it maintained over 97.5% of the initial efficiency even after 1,000 hours. After 5,000 bending tests, it showed excellent mechanical durability, such as maintaining 94% of the initial efficiency and thus is applied to next-generation wearable devices.

Professor Hyesung Park in the School of Energy and Chemical Engineering at UNIST said, “The new method of inserting graphene interlayer has significantly improved the efficiency and stability of the perovskite solar cells. We expected that this would greatly help in the development of various next-generation flexible photovoltaic devices based on perovskite, such as LEDs and smart sensors, as well as solar cells.”

The findings of this research have been published online in Nano Letters on May 13, 2020. The Basic Science Research Program has supported this work through the National Research Foundation of Korea (NRF) funded by the Ministry of Science and ICT (MSIT). It has also been supported by the 2019 Research Fund of KOREA East-West Power Co., LTD (EWP).