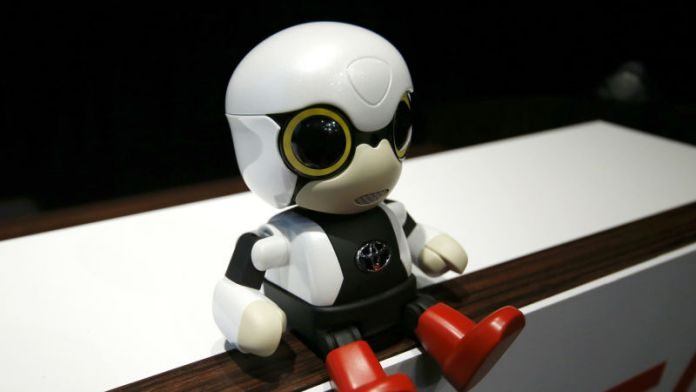 Toyota, a car manufacturer company has launched a new palm-sized baby robot called as Kirobo Mini. It is designed to provide companionship. Additionally, it could alter conversations to add comments about journeys based on data from its owner’s vehicle. It even has child-like attributes.

A robotics expert said, “It could not be a substitute for a child.”

Fuminori Kataoka, Kirobo Mini’s chief design engineer said, “The robot wobbles a bit, and meant to convey a seated baby, which hasn’t fully developed the skills to balance itself. This vulnerability is meant to invoke an emotional connection.”

This cute baby robot has the size of 10cm (4in) high and its weight is about only 800 grams. It even could claim to young people. The KIROBO was made by the same factor as the successful AIBO. It has the same intelligence as a five-year-old child. Kirobo can easily adjust into the palm of your palm.

Prof Dr. Kerstin Dautenhahn said, “The idea of having a cute little thing that is not necessarily giving you the impression that it is alive but has these lifelike attributes. They are appealing to people’s nurturing instincts.”

By using gestures, facial expressions, and blinking, this baby robot Kirobo can engage people in conversation. It can remind user preferences and previous events. For example, likes dislikes and outings. It uses data from connected devices such as those in the home or car to generate comments.

The company said, “There is no plan to sell this baby robot outside Japan.”

“It was offensive to believe that it could be a child substitute for women without children. Thus, it might make people feel good. But, here is no human component,” she added.