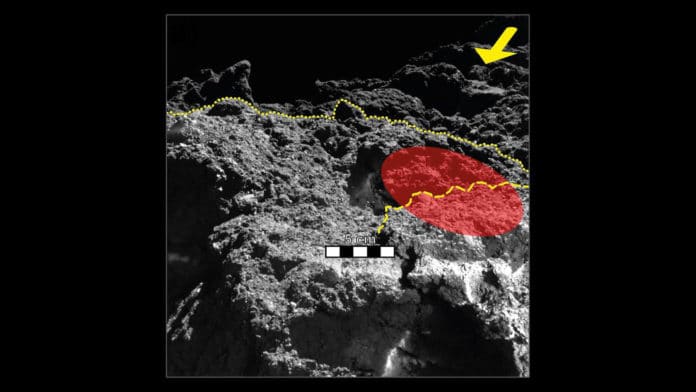 C-type asteroids are among the most pristine objects in the Solar System, but little is known about their interior structure and surface properties. Telescopic thermal infrared observations have so far been interpreted in terms of a regolith-covered surface with low thermal conductivity and particle sizes in the centimeter range.

This includes observations of C-type asteroid (162173) Ryugu. Be that as it may, on the landing of the Hayabusa2 rocket at Ryugu, a regolith cover of sand-to pebble-sized particles was observed to be absent. Or maybe, the surface is mostly covered by cobbles and boulders, seemingly contrary with the remote-sensing infrared observations.

In a new study, scientists at the German Aerospace Center (Deutsches Zentrum fuer Luft- und Raumfahrt, DLR), reported in situ thermal infrared observations of a boulder on the C-type asteroid Ryugu. They found that Ryugu and other asteroids of the common “C-class” consist of more porous material than was previously thought.

Thus, small fragments od their material are quite fragile to survive entry into the atmosphere in the event of a collision with Earth.

The results are based on high-resolution measurements of the surface temperature with the DLR radiometer MARA on board the German-French Mobile Asteroid Surface Scout (MASCOT) lander. On 3 October 2018, as part of the Japanese Hayabusa2 mission, MASCOT descended onto the almost one-kilometer-diameter asteroid Ryugu and sent spectacular images and physical measurements from the surface back to Earth.

Matthias Grott, Principal Investigator for the MARA radiometer experiment at the DLR Institute of Planetary Research in Berlin and lead author of the study, said, “Ryugu surprised us. On the asteroid, we observed only larger fragments that are highly porous and probably very fragile.”

“Earlier telescopic infrared light curves of such carbon-rich asteroids acquired from Earth had been interpreted by researchers studying their thermal properties as bodies covered in sand- to pebble-sized particles. In total, 21 DLR scientists from institutes in Berlin, Bremen, and Cologne participated in the study, together with international partners.”

Hansjoerg Dittus, DLR Executive Board Member for Space Research and Technology said, “MASCOT has brought together DLR’s broad range of expertise in space research—from design, development, and testing to experience in the scientific exploration of the solar system. The first published results are impressive proof of this.”

Until now, just a few chondritic meteorites found on Earth have been recognized as pieces of C-type asteroids, which are normal in the solar system (“C’ is the substance image for the component carbon). Chondrules are small, millimeter-sized rock globules that formed in the solar cloud 4.5 billion years go and are viewed as the basic building blocks of planet formation.

Grott said, “We can now confirm that fragments of these asteroids are very likely to break up further when they enter Earth‘s atmosphere, and then usually burn up completely. This means that only the largest fragments reach the Earth’s surface. That is why meteorites from this type of asteroid are so rarely found on Earth.”

“The good news is that, because of this, Earth’s atmosphere offers increased protection from C-type asteroids, which account for 75 percent of all asteroids. Ryugu is a C-class asteroid, a carbon-rich representative of the oldest bodies in the 4.5 billion-year-old solar system, and thus a building block of planet formation. It is one of the oldest of the 17,000 asteroids with orbits known to intersect that of Earth. However, further research is necessary to determine the maximum asteroid size for which this atmospheric protection is effective.”

Scientists observed the increase and decrease of the surface temperature over the course of the asteroid’s roughly seven-and-a-half-hour diurnal cycle by measuring the infrared radiation emitted by the surface during the day and at night, using the MARA radiometer.

The MARA measurements made it possible to infer the thermal properties and density of the material. The data from MASCOT were transmitted to the Japanese Hayabusa2 spacecraft. The craft was located at an observing position three kilometers above the asteroid’s surface. From there, MASCOT sent all measurement and operational data to Earth.

The gravitational attraction of Ryugu is 66,500 times weaker than that of Earth, so the modest quantity of momentum created by the arm was adequate.

This technical innovation for an unusual type of mobility on an asteroid surface was utilized without precedent for the historical backdrop of room investigation as a feature of the Hayabusa2 mission.

The Hayabusa2 mission on Ryugu will continue until the end of 2019, to return samples of the asteroid material to Earth by 2020. On 11 July, Hayabusa2 completed the second touchdown operation on the asteroid.

The paper is published in the journal Nature Astronomy.