Scientists Invent Leaping Robot for Search and Rescue During Disasters 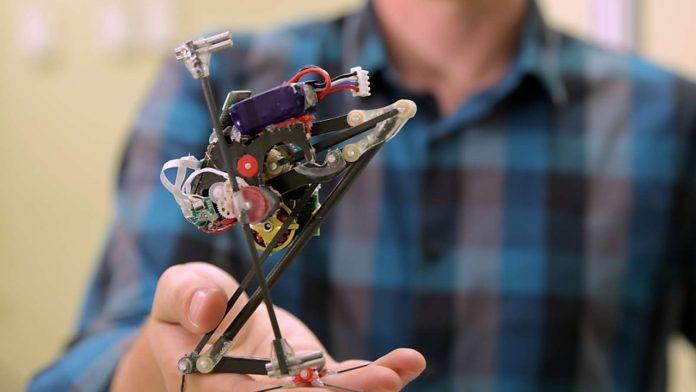 Scientists from the University of California have developed a new tiny high jumping robot. The robot can climb up to 11 feet into the air. This leaping robot is also known as SALTO. SALTO stand for saltatorial locomotion on terrain obstacles. This robot has the potential that it can save soldiers or victims life during war or disaster.

To create this leaping robot, scientists first studied the animal kingdom’s most vertically agile creäture, the Ggalago. The robot is actually based on leaping primate called as a Gglago. Galago is an animal that stores energy in its tendons while crouching, it could use the energy to jump at heights and speeds surprising for small species. The Ggalago can jump 27.9 feet in just four seconds after five jumps.

Duncan Haldane, a robotics Ph.D. candidate at UC Berkeley said, “Developing a metric to easily measure vertical ability was key to SALTO’s design because it allowed us to rank animals by their jumping ability and then identify a species for inspiration.”

SALTO’s leaping ability makes it truly spectacular. It stands on one leg and can leap from the floor to the wall in mere 0.58 seconds. The robot stores energy in its tendons to jump to heights its muscles alone cannot achieve.

Scientists reported, the parts of this leaping robot are developed using 3-D printed plastic and carbon fiber materials. Each part of it is lightweight and durable. They can withstand force enough to filter through rubble during a calamity or disaster. It consists of a camera and a GPS that could easily move in places where humans will have difficulty navigating alone. The tendon-loading ability of SALTO enables the device to spring off the walls. The motor inside it drives a spring that loads through a leg mechanism for its signature crouch. Thus, it could fly through the air and leave the ground at an incredible speed.

Professor Ronald Fearing said, “By combining biologically inspired design principles with improved engineering technology, matching the agile performance of animals may not be that far off.“

A blood-sampling robot for automated blood drawing and testing

Device made of heart tissue and a robotic pumping system beats like the real thing.
Read more
Robotics

A soft robot muscle that can regulate its temperature through sweating

The new material is half as light as paper, which also makes it more power efficient.
Read more