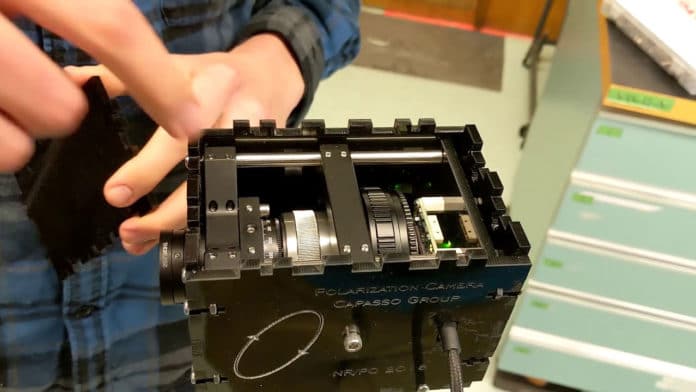 Polarization describes the path along which light’s electric field vector oscillates. An essential quality of electromagnetic radiation, polarization is often omitted in its mathematical treatment. Nevertheless, polarization and its measurement are of interest in almost every area of science, as well as in imaging technology.

Imaging the polarization of light scattered from an object gives an additional opportunity for digging more information from the scene. Conventional polarimeters can be bulky and usually comprise of precisely moving parts.

In a new study, scientists at the Harvard John A. Paulson of Engineering and Applied Sciences (SEAS) have devised highly compact, portable camera to image polarized light in a single shot.

The camera comes without any conventional without conventional polarization optics and moving parts. Works on the principle of polarisation, the camera offers detail information about the objects with which light interacts.

Paul Chevalier, a postdoctoral fellow at SEAS and co-author of the study, said, “Polarisation is a feature of light that is changed upon reflection off a surface. Based on that change, polarisation can help us in the 3D reconstruction of an object, to estimate its depth, texture, and shape, and to distinguish human-made objects from natural ones, even if they’re the same shape and color.”

Scientists primarily harnessed the potential of metasurfaces, nanoscale structures that interact with light at wavelength size-scales. Then by understanding how polarized light interacts with objects, they designed a metasurface that uses an array of subwavelength spaced nanopillars to direct light based on its polarization.

The light then forms four images, each one showing a different aspect of the polarization. Taken together, these give a full snapshot of polarization at every pixel.

The researchers tested the camera to show defects in injection-molded plastic objects, took it outside to film the polarization off car windshields and even took selfies to demonstrate how a polarization camera can visualize the 3D contours of a face.

Federico Capasso, the Robert L. Wallace Professor of Applied Physics and Vinton Hayes Senior Research Fellow in Electrical Engineering at SEAS, said, “This research is game-changing for imaging. Most cameras can typically only detect the intensity and color of light but can’t see polarization. This camera is a new eye on reality, allowing us to reveal how light is reflected and transmitted by the world around us.”

Noah Rubin, first author of the paper and graduate student in the Capasso Lab said, “This technology could be integrated into existing imaging systems, such as the one in your cell phone or car, enabling the widespread adoption of polarization imaging and new applications previously unforeseen.”

The research is published in Science.

Other co-authors of the study include Gabriele D’Aversa, Zhujun Shi, and Wei Ting Chen. It was supported by the National Science Foundation, the Air Force Office of Scientific Research, a Physical Sciences & Engineering Accelerator grant from Harvard University’s Office of Technology Development, Google Accelerated Science and King Abdullah University of Science and Technology. This work was performed in part at Harvard’s Center for Nanoscale Systems.