A new way to sensorize soft robots and wearables

A safer and quicker way to manufacture sensors onto soft, deformable structures. 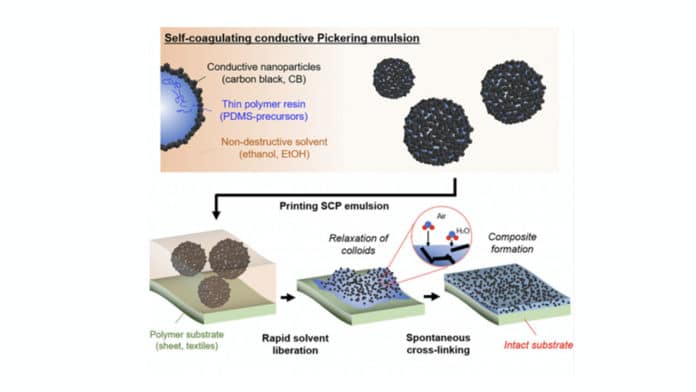 Many soft robotic systems require integrated sensors that can extend and accommodate along surface contours. Over the last decade, composite materials made using polymer, and conductive fillers have gotten a well-known decision to apply for wearable, stretchable sensors as a result of their capacity to upscale the process.

In any case, the manufacturing procedure can be bulky, and the solvents used to cause them to can be dangerous and damaging to the robot or wearer. For example, applying a typical conductive ink directly to a latex balloon would quickly burst the ballon as a result of the conventional solvent present in ink.

Scientists at Yale University have developed a safer and quicker way to manufacture sensors onto soft, deformable structures. They came up with a process that uses a combination of ethanol filled with polymer resin particles, which are coated in even smaller carbon black nanoparticles. After printing, the polymer and carbon black immediately coagulate to form a conductive material, while the ethanol vanishes away. Since the solvent is used as a carrier and not to thin the polymer, safer solvents can be utilized, which lessens safety concerns to anyone working with them.

The method was modeled on hemostasis, the body’s system for healing wounds, where plasma carries blood platelets to be deposited at the site of injury. As it directly transports microscopic substances and their spontaneous coagulation, it’s a quick and efficient process.

Sang Yup Kim, a postdoctoral researcher in Kramer-Bottiglio’s lab said, “Analogue to the plasma is the ethanol, which carries the carbon black nanoparticles and the polymer resin, which act as proteins or platelets inside the blood, and those are deposited onto the target, or printed, location.”

Scientists created the compliant sensors by printing the blood-mimicking emulsion ink, known as a self-coagulating Pickering emulsion, directly onto soft polymer materials, including soft actuators and conventional textiles. The resulting sensors were highly sensitive and exhibited low hysteresis, which makes them useable for soft robotic applications and wearable robotic devices.