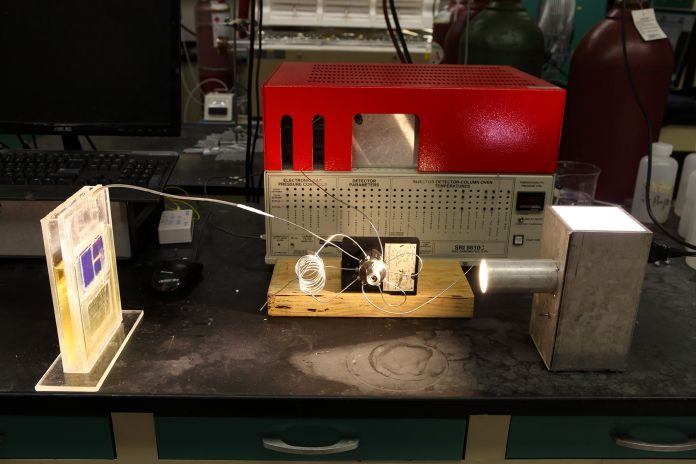 We all know solar cell is an essential part of science that produces usable energy from sunlight. Additionally, scientists also learning how to harness this important resource and use it as traditional energy resource. Previously, you all came to know about ‘STPV‘, a thermophotovoltaic device that converts sun’s heat into usable energy. Here one more time, Scientists from the University of Illinois at Chicago devised a possibly game-changing solar cell; artificial leaf.

This new photosynthetic solar cell can effectively and cheaply converts carbon dioxide into usable hydrocarbon fuel. It just uses sunlight for energy and does the work of plants, converting carbon dioxide into fuel by solving two complex problems at once. This artificial leaf could be used to discard an essential amount of carbon from the atmosphere and generate energy-dense fuel effectively.

Now scientists can repeatedly process and recycle atmospheric carbon into fuel using sunlight. This is far better than generating in an unsuitable one-way route from fossil fuels to greenhouse gas.

Whereas plants generate fuel in the form of sugar, the artificial leaf delivers synthesis gas. A synthesis gas is a combination of hydrogen gas and carbon monoxide. Synthesis gas can be burned directly or converted into diesel or other hydrocarbon fuels.

Scientists have investigated different catalysts to accelerate CO2 reduction. But such reactions are ineffective and depends on upon expensive metals like silvers. They exactly required a group of chemicals with outstanding properties.

So, scientists concentrated on a family of Nanostructured compounds called transition metal dichalcogenides (TMDCs) as catalysts. They then paired it with an unconventional ionic liquid as the electrolyte inside a two-compartment, three-electrode electrochemical cell.

The artificial leaf composed of two silicon triple junction photovoltaic cells with 18 square centimetres to harvest light. At cathode side, the cells of 18 square centimetres to harvest light is present and at the anode side, cobalt oxide in potassium phosphate electrolyte is present. When light with the force of 100 watts per square meter reaches earth surface, it then energises the cell. Whereas, hydrogen and carbon monoxide gas generate from the cathode. At the same time, oxygen and hydrogen ions generated from the anode side. Hydrogen gas is diffused with the membrane to the cathode side, to enter into carbon dioxide reduction reaction.

This technology has various applications in large scale as well as small scale. According to researchers, it also could be useful on mars, where the atmosphere is mostly carbon dioxide if the planet has water.

Robert McCabe, NSF program director, said, “This work has benefitted from the significant history of NSF support for basic research that feeds directly into valuable technologies and engineering achievements. The results nicely meld experimental and computational studies to obtain new insight into the unique electronic properties of transition metal dichalcogenides.”

“The research team has combined this mechanistic insight with some clever electrochemical engineering to make significant progress in one of the grand challenge areas of catalysis as related to energy conversion and the environment,” he continued.

Plants make their own ‘secret’ decisions about carbon release