Solar storms could be more extreme if they ‘slipstream’ behind each other. 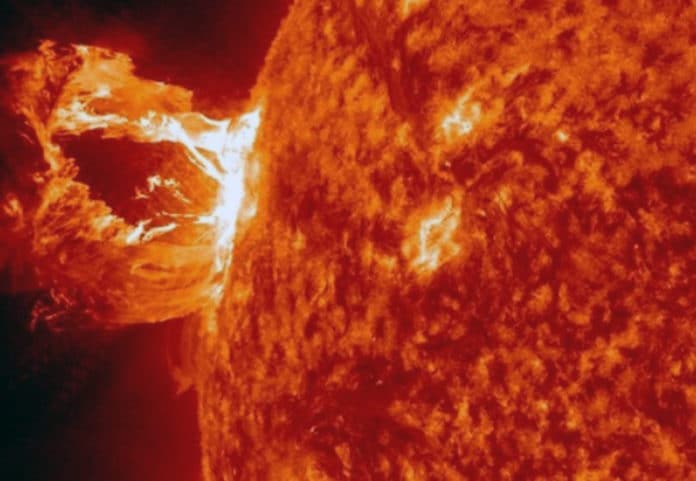 Coronal Mass Ejections (CMEs) are large expulsions of plasma and magnetic fields from the Sun’s corona. They can eject billions of tons of coronal material and carry an embedded magnetic field (frozen in flux) stronger than the background solar wind interplanetary magnetic field (IMF) strength. CMEs travel outward from the Sun at speeds ranging from slower than 250 kilometers per second (km/s) to as fast as near 3000 km/s.

CMEs can be catastrophic, causing power blackouts that would disable anything plugged into a socket and damage transformers that could take years to repair. Accurate monitoring and predictions are, therefore, essential to minimizing damage.

A new study by the Imperial College London has shown how CMEs could be more extreme than previously thought when two events follow each other.

Scientists studied a large CME that occurred on 23 July 2012 and narrowly missed Earth by a couple of days. The CME was estimated to travel at around 2250 kilometers per second.

Lead author Dr. Ravindra Desai, from the Department of Physics at Imperial, said: “This event could have been even more extreme – faster and more intense – if it had been launched several days earlier directly behind another event.”

What makes CMEs so extreme?

To find out the answer, scientists investigated one of the possible causes: the release of another CME on 19 July 2012, just a few days before. It has been suggested that one CME can ‘clear the way’ for another.

However, if a previous CME has recently passed through, the solar wind will be affected so that it will not slow down the subsequent CME as much.

Using a newly developed model, scientists represented the characteristics of the 23 July. They also simulated what would happen if it had occurred earlier or later – i.e., closer to or further from the 19 July event.

They found that by the time of the 23 July event, the solar wind had largely recovered from the 19 July event, so the previous event had little impact. However, their model showed that if the latter CME had occurred earlier, closer to the 19 July event, then it would have been even more extreme – perhaps reaching speeds of up to 2750 kilometers per second or more.

Han Zhang, co-author and student who worked on the development of this modeling capability said: “We show that the phenomenon of ‘solar wind preconditioning,’ where an initial CME causes a subsequent CME to travel faster, is essential for magnifying extreme space weather events. Our model results, showing the magnitude of the effect and how long the effect lasts, can contribute to current space weather forecasting efforts.”

Emma Davies, co-author and Ph.D. student, said: “There have been previous instances of successive solar storms bombarding the Earth, such as the Halloween Storms of 2003. During this period, the Sun produced many solar flares, with accompanying CMEs of speeds around 2000 km/s.”

“These events damaged satellites and communication systems, caused aircraft to be re-routed, and a power outage in Sweden. There is always the possibility of similar or worse scenarios occurring this next solar cycle. Therefore accurate models for prediction are vital to help mitigate their effects.”

The Sun emitted a strong solar flare on Tuesday