Turning a non-magnetic metal into a magnet using laser light

This would open up a wide variety of potential applications across a range of high-quality plasmonic materials such as graphene. 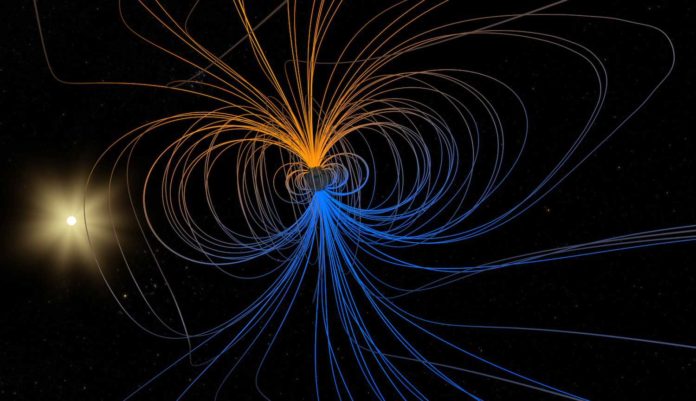 Magnetism is one part of the consolidated electromagnetic force. It alludes to physical phenomena emerging from the force brought about by magnets. Magnets produce their magnetic fields by circulating currents, similar to those found in regular electromagnetic coils. The ‘handedness’ of these coils – regardless of whether they are twisted in clockwise or anticlockwise direction – decides the course of the magnetic field created.

According to physicists from Nanyang Technological University, Singapore, when non-magnetic metallic disks are illuminated by linearly polarised light – light that does not possess any handedness of its own – circulating electric currents and hence magnetism can spontaneously emerge in the disk.

In a new study, physicists from NTU Singapore and Niels Bohr Institute in Copenhagen, Denmark have demonstrated a method that can potentially transform a non-magnetic metal into a magnet using laser light.

Using a combination of pencil-and-paper calculations and numerical simulations, scientists also have devised another way to think about the interaction between light and matter. This method could demonstrate how novel strong light-matter interactions could be used to create material properties ‘on-demand’.

Assistant Professor Justin Song from NTU’s School of Physical and Mathematical Sciences said, “If realized experimentally, this would open up a wide variety of potential applications across a range of high-quality plasmonic materials such as graphene.”

During the study, scientists wanted to examine how plasmons and the intense oscillating electric fields they generate can be used to alter material properties. They found that when the light irradiation is strong enough, the plasmons in a non-magnetic metallic disk can spontaneously rotate in either a left-handed or right-handed fashion, even when driven by linearly polarised light.

Asst Prof Song said, “This was a sign that the material’s intrinsic properties had been altered. We found that when a plasmon’s strong internal fields modify a material’s electronic band structure, it would also transform the plasmon as well, setting up a feedback loop enabling the plasmon to exhibit a chirality spontaneously.”

“This chiral motion of the plasmon produced a magnetization which then made the non-magnetic metallic disk of their scheme, magnetic.”

Associate Professor Mark Rudner from Niels Bohr Institute said, “From the point of view of an electron within a material, an electric field is an electric field: it doesn’t matter whether this oscillating field was produced from plasmons within the material itself or by a laser shining on the material.”

Asst Prof Song added, “We found that the plasmons can acquire a kind of ‘separate life’ or ‘emergence’ with new properties that were not present in either the metal that hosts the plasmons or the light field that was driving it. The behavior of the plasmon was emergent in the sense that it broke the intrinsic symmetries of both the light field and the metal.”

Scientists used this insight to theoretically demonstrate the conditions when feedback from the internal fields of the plasmons could trigger an instability towards spontaneous magnetization in the system. The team expects that this theoretical approach could be realized in a range of high-quality plasmonic materials such as graphene.

Assoc Prof Rudner said, “On a deeper level, there are many fundamental questions to explore about the nature of the non-equilibrium spontaneous symmetry breaking (’emergence’) that we predicted.”

Asst Prof Song agreed, saying “Perhaps the most meaningful take-home message of our work is that it shows that collective modes can exhibit distinct new phases. If plasmonic magnetism is possible, what other phases of collective modes are waiting to be uncovered?”

The study was published in the scientific journal Nature Physics earlier this month.

An exotic form of magnetism has been discovered