How the excitons in the perovskite react to the presence of a high charge carrier density? 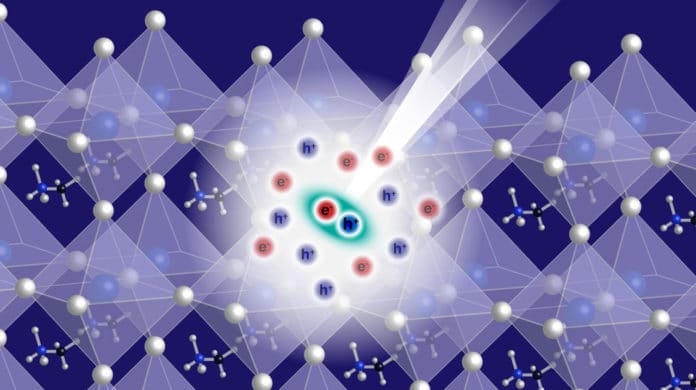 Excitons monitor the optical properties of semiconductors. Excitons are significant because they transport energy (with no net charge) across materials, and in this manner, they assume a pivotal job in various optoelectronic devices.

The ability to control the excitonic properties of semiconductors is key to broadening the range and diversity of applications. Specifically, when the density of charge carriers increases, excitons tend to melt, and a semiconductor eventually turns into metal at the so-called Mott density.

In 1967, Gerald Mahan predicted that there is a different type of exciton that persists above the Mott density. Since then, scientists are trying to find out so-called Mahan exciton that has not yet observed.

Now, scientists from EPFL, in collaboration with Alexander Steinhoff (University of Bremen), Ana Akrap (University of Fribourg), and the group of László Forró (EPFL), have uncovered signatures of Mahan excitons in the very popular lead-bromide organic-inorganic perovskite. They mapped how the material’s optical properties modify at increasing densities of charge carriers with a temporal resolution of tens of femtoseconds. Mahan excitons emerged in the optical properties with the distinctive features predicted by theory.

What’s make this discovery interesting is that this new quasiparticle has been observed in a room temperature lead-halide perovskite, a cheap and abundant semiconductor that is intensely investigated for applications such as photovoltaics, luminescent materials, or lasers.

The latter two applications strongly rely on high densities of charge carriers. Furthermore, on the first side, these findings deepen our knowledge of many-body phenomena in condensed matter systems, paving the route toward the use of perovskites for the Bose-Einstein condensation of hybrid states of light and excitons.

Edoardo Baldini (previous Ph.D. student at the EPFL and now a postdoctoral researcher at MIT) said, “We were studying how the excitons in the perovskite react to the presence of a high charge carrier density. Suddenly we observed a spectroscopic feature that could not be explained in the framework of other phenomena known in semiconductors.”

Tania Palmieri, the Ph.D. student that led the project, said, “Digging into the theory we realized it could have been due to the excitons predicted by Mahan long ago. This discovery further demonstrates that hybrid perovskites are special materials not only for optoelectronic applications but also for unveiling new fundamental processes.”

The study is published in Nature Communications.

Our brain has its own unique fingerprint