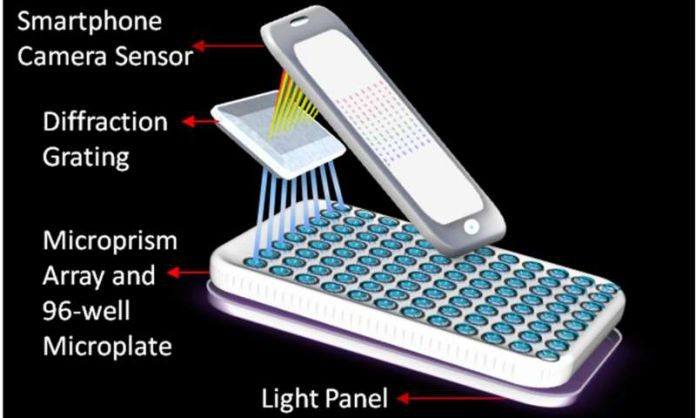 Similarly, scientists from Washington State University have developed a compact laboratory on a smartphone. This smartphone laboratory can detect various samples at one time to catch a cancer biomarker by producing lab quality results. Physicists want patients to get instant treatment. For this, they are trying to interpret detection technologies used in laboratories to the field and clinic.

Scientists have created an eight channel smartphone spectrometer. This spectrometer detects human interleukin-6 (IL-6), a known biomarker for lung, prostate, liver, breast and epithelial cancers. It examines the amount and type of chemicals in a sample by measuring the light spectrum. Generally, smartphone spectrometers only monitor or measure a single sample at one time. This makes them ineffective real world applications.

As compare to previous conventional spectrometers, this novel smartphone spectrometer can measure more than eight different samples at one time. It only uses a common test called ELISA, or colorimetric test enzyme-linked immunosorbent assay that identifies antibodies and colour change as disease markers. The device shows 99 percent of accuracy with standard lab-controlled samples.

Lei Li, said, “With our eight channel spectrometer, we can put eight different samples to do the same test, or one sample in eight different wells to do eight different tests. This increases our device’s efficiency.” (Li is the assistant professor in the School of Mechanical and Materials Engineering.)

“The spectrometer would be especially useful in clinics and hospitals that have a large number of samples without on-site labs, or for doctors who practice abroad or in remote areas. They can’t carry a whole lab with them. They need a portable and efficient device,” he added.

Li’s design works with an iPhone 5. He is creating an adjustable design that will be compatible with any smartphone.