The finding could be crucial for a better understanding of the properties of molecular gas in this object. 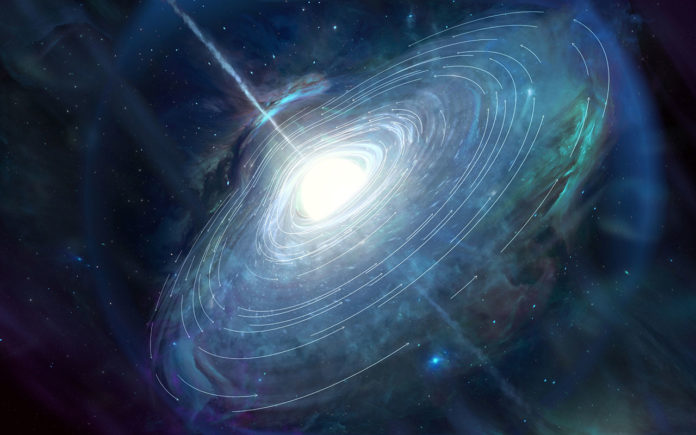 As the third most abundant element in the universe after hydrogen and helium, oxygen and its chemistry in dense interstellar clouds are essential for understanding the properties of molecular gas. Searches for O2 emission in the Milky Way have been carried out from orbital observatories, including the Submillimeter Wave Astronomy Satellite (SWAS), Odin, and Herschel.

Recent observations made by using the IRAM 30-meter telescope and the NOEMA Interferometer unveiled the presence of molecular oxygen in Markarian 231.

Located some 581 million light-years away, Markarian 231 (or Mrk 231 for short) is the nearest known QSO and the most luminous ULIRG (Ultra-Luminous InfraRed Galaxy) in the local universe. The quasar features molecular velocity outﬂows, just as millimeter emanation of carbon monoxide (CO), and is seen in dense gas tracers. With everything taken into account, the properties of Mrk 231 make it a singular objective to scan for extragalactic O2 discharge.

Junzhi Wang of the Shanghai Astronomical Observatory in China said, “We report the detection of an emission feature at the 12σ level with FWHM line width of about 450 km/s toward the nearest quasi-stellar object, QSO Mrk 231. Based on observations with the IRAM 30 m telescope and the NOEMA Interferometer, the 11-10 transition of molecular oxygen is the likely origin of line with rest frequency close to 118.75 GHz.”

The O2 emission was seen as found exactly 32,600 light-years from the center of Mrk 231. The velocity integrated ﬂux of the molecular oxygen discharge was estimated to be 0.88 K km/s, which compares to 4.4 Jy km/s. It was discovered that the ﬂux of recognized O2 emission is practically identical to that of a red wing of carbon monoxide recently distinguished in 2012, which is about 2.32 Jy km/s.

According to scientists, the O2 emission in Mrk 231 may be caused by the interaction between the AGN-driven molecular outﬂow and the outer disk molecular clouds. They added that asymmetry in spatial and velocity distribution of O2 emission could be attributed to the geometry of molecular gas in the quasar and the asymmetry of the molecular outﬂow from the central AGN.

They noted, “The velocity of the O2 emission in Mrk 231 coincides with the red wing seen in CO emission, suggesting that it is associated with the outﬂowing molecular gas, located mainly at about ten kpcs away from the central AGN.”

The study is detailed in a paper published on the arXiv.