Workable sensor with the least possible resistance to motion. 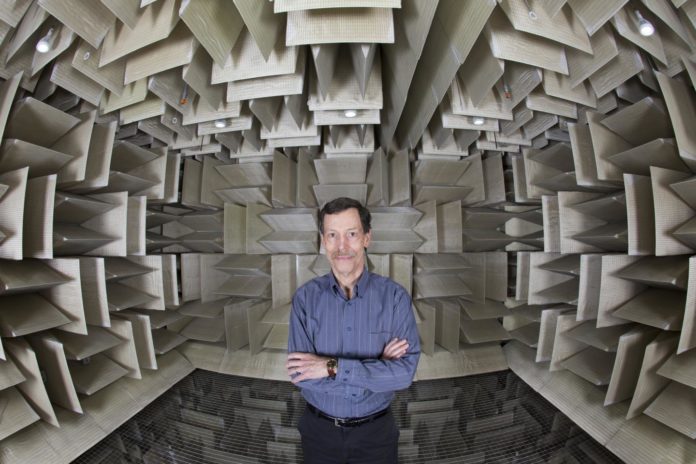 As a part of progressing acoustic research at Binghamton University, State at New York Distinguished Professor Ron Miles has made a workable sensor with the slightest resistance from movement. The thin and adaptable sensor is perfect for detecting sounds since it can move with the wind current made by even the mildest commotions and addresses issues with accelerometers, amplifiers and numerous other comparative sensors.

Two billion capacitive microphones are produced every year but making them both small and effective comes with some challenges.

This new platform allows scientists to detect the motion of extremely thin fibers or films by sensing changes in an electric field without the use of a magnet.

Miles detect the motion of extremely thin fibers or films by sensing changes in an electric field without the use of a magnet. This is for the first time, to use capacitive sensing on extremely flexible, thin materials.

The design that allows the thin, flexible sensor – which could be spider silk or any other material just as thin – to swing above two fixed electrodes. Because the sensor is at a 90-degree angle from the electrodes, the electrostatic forces don’t affect its movement.

This is a basic outline of the design that the sensors need a high bias voltage – the voltage required for a device to work – to be powerful since the affectability of the sensor increments with a high predisposition voltage.

This plan implies that capacitive sensors, similar to the ones utilized as a part of cell phones, can be both smaller and more proficient.

Miles said, “the unique design also provides a few other benefits important in various applications. The way the sensor is designed now means that it has a nearly constant potential energy but can also return to its equilibrium after large motions.”

The study is reported online in IEEE Xplore Digital Library.