Scientists have found a way to overcome problems associated with prior attempts to speed up magnetic field generation. 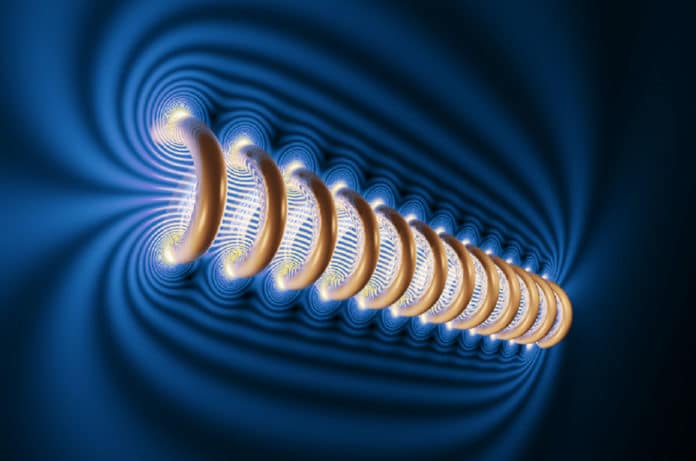 Magnetic fields are inseparable from light-matter interaction. They play a vital role in multiple research areas, such as medicine. But, generating strong magnetic fields rapidly has been lagging.

In a mew new study, a collaboration between scientists from the University of Ottawa and National Research Council Canada has found a whole new way to generate rapid, strong magnetic fields using laser pulses.

Scientists, in this new effort, have proposed an azimuthal-vector laser beam.

In such a system, the electric field lines should take the shape of circles around a central beam axis. The system is generally exceptional in the ring-shaped part of the region that ought to take into consideration sending an electron around the ring, creating a magnetic field toward the beam.

The analysts’ thought likewise presents a second laser with a frequency tuned to twice that of the main beam. This changes the time of the procedure, permitting electrons to move when the field is at its peak.

Simulations of their idea showed that if an 11.3-microjoule main laser pulse was used and a 1.9-microjoule frequency-doubled pulse was added as the second laser, the system would be able to turn on an 8-Tesla field in just 50 femtoseconds.

Scientists noted, “Such a setup could be used in typical lab settings, though they note it would likely destroy magnetic samples under study. These problems could be reduced by moving samples farther away from the magnetic field. They further suggest that devices built using their ideas could be used for optoelectronics requiring speedy switches.”

Scientists created a wide range of colors from a single laser

Supercontinuum generation is when intense laser light of one color travels within a material, similar to glass, and expands into a spectrum...
Read more
Science

Recently, Rice scientists have made a breakthrough, i.e., a neural implant that can be both programmed and charged remotely with a magnetic...
Read more
Invention

Capturing a picture of a light pulse

The advance will now help to clarify important details about the interaction of light and matter.
Read more
Science

Pinning down the timing of lunar dynamo’s demise

Findings suggest the moon’s magnetic field was produced by the fallout of a crystallizing iron core.
Read more