Asteroid with its own moon will pass by Earth this weekend

Earth will be getting not one but two visitors from space this weekend. 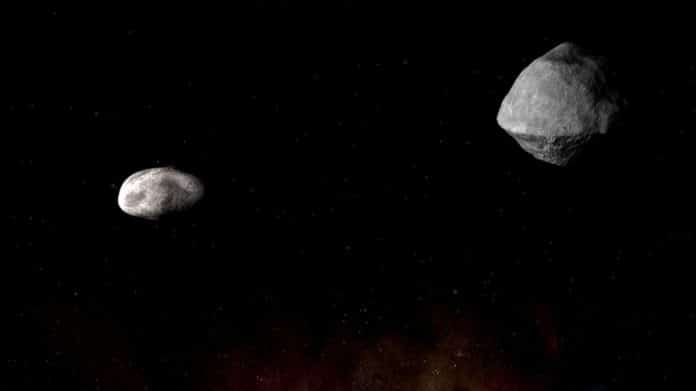 The asteroid with the number 66391 (also known as 1999 KW4) is what is known as a Near Earth Asteroid because its orbit around the Sun takes it close to Earth’s orbit. According to recent reports, the asteroid is going to pass by Earth at 7.05 p.m. ET, when the paired objects will be about 3 million miles from Earth and moving at a speed of about 50,000 miles per hour.

What’s astonishing is, the asteroid is large enough that it has its own moon, that will zoom harmlessly past Earth this weekend. Meanwhile, there will be two visitors to Earth from space.

It’s called a binary system because there are two asteroids that are gravitationally bound together. The larger one is just under a mile in diameter and its companion asteroid “moon” is about a third of that size.

Even so, astronomers will be watching the flyby using a combination of Earth- and space-based telescopes — part of an ongoing effort to improve our planetary defenses against catastrophic asteroid strikes of the sort seen in a disturbing simulation conducted recently in Washington.

Vishnu Reddy, a planetary scientist at the University of Arizona in Tucson said, “It’s one of the closest binary flybys probably in recent history.

Astronomers imaged 42 of the biggest asteroids in our Solar System