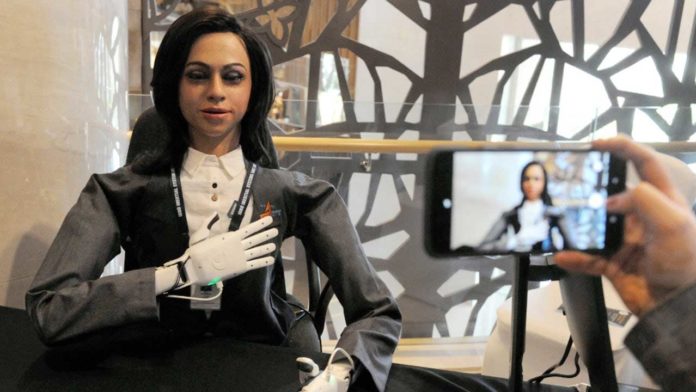 ISRO has recently unveiled a robot named Vyom Mitra that will travel to space as a part of the mission called Gaganyan.

Also known as a friend in the sky, Vyom Mitra is a half-humanoid robot that can communicate with astronauts, recognize them, and also respond to their queries.

Vyom Mitra will be the first Indian woman to ride to space. The human-looking robot doesn’t have legs and can only move sideward and forward. She can detect and give out warnings if environmental changes within the cabin get uncomfortable with astronauts and change the air condition. Also, she can take up postures suited for launch and tasks and take commands.

She gathered everyone’s attention at the inaugural session of the “Human Spaceflight and Exploration – Present Challenges and Future Trends” seminar on Wednesday in Bengaluru. She wowed everyone as she introduced herself to ISRO Chairman K. Sivan and Principal Scientific Adviser K. VijayRaghavan at the symposium on human space flight.

While introducing herself, she said, “I am Vyom Mitra. I can do switch panel operations, ECLSS [environment control and life support systems] functions, be a companion, converse with the astronauts, recognize them, and also respond to their queries.”

ISRO Chairman K. Sivan said, “The humanoid will simulate the human functions required for space before real astronauts take off before August 2022. Two trial flights without a crew will take place with a humanoid — the first around December 2020 and the second around July 2021.”

“Four Indian Air Force pilots have been shortlisted for the manned mission. They are currently undergoing an 11-month training programme in Russia.”

ISRO will send the human-resembling model in a space capsule around the end of 2020 or early 2021 to study how she — and later real astronauts — respond to living outside earth in controlled zero-gravity conditions.

Gaganyaan is India’s manned space mission, which the ISRO aims to launch by December 2021. The project aims at sending the astronauts to a lower orbit of the earth, and the spacecraft will have a capsule with an adequate supply of oxygen and other essential material and facilities for the Gagan Yatris.

A blood-sampling robot for automated blood drawing and testing

Device made of heart tissue and a robotic pumping system beats like the real thing.
Read more
Robotics

A soft robot muscle that can regulate its temperature through sweating

The new material is half as light as paper, which also makes it more power efficient.
Read more
Robotics

RoboBee can crash, fly, and collide without being damaged

It is the first microrobot powered by soft actuators to achieve controlled flight.
Read more