A unique three-dimensional map of the Milky Way

The map provides insights into the structure and history of our Galaxy. 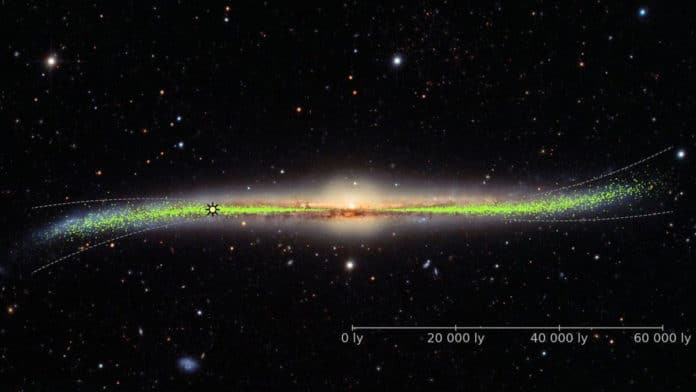 The Milky Way is a large barred spiral galaxy. All the stars we see in the night sky are in our own Milky Way Galaxy. Our galaxy is called the Milky Way because it appears as a milky band of light in the sky when you see it in a really dark area.

The present learning about the state of the Milky Way disk depends on different tracers, (for example, star counts or radio perceptions of gas molecules) informed by the extrapolation of structures seen in different galaxies. In any case, the separations to these tracers are estimated in a roundabout way and are model-dependent. The most powerful strategy for contemplating the state of the Milky Way is legitimately measured distances to a large sample of stars of a particular sort, which would enable one to build the three-dimensional map of the Galaxy.

Cepheid variable stars are ideal for this task. Cepheids are young pulsating supergiants, their splendor changes in a regular pattern with a well-characterized period which may run from hours to several dozen days.

Cepheids follow a relation between their pulsation period and radiance, permitting the intrinsic glow of a Cepheid to be construed from its period. The separation would then be able to be controlled by contrasting the apparent and inherent brightness.

The presence of interstellar dust and gas causes additional difficulty that may dim the brightness of a Cepheid.

To create a new three-dimensional map of the Milky Way, scientists used a sample of over 2,400 Cepheids, the majority of which have been newly identified in the photometric data collected by the Optical Gravitational Lensing Experiment (OGLE) survey. It is the first map that is based on direct distances to thousands of individual objects as distant as the expected boundary of the Galactic disk.

The mao demonstrates that the Milky Way circle isn’t flat, instead, it is warped at distances more prominent than 25,000 light-years from the Galactic center.

Przemek Mróz, a graduate student at the University of Warsaw said, “Warping of the Galactic disk has been detected before, but this is the first time we can use individual objects to trace its shape in three dimensions. Stars in the outer parts of the Milky Way disk may be displaced from the Galactic plane by 4,500 light-years relative to the central regions of the Galaxy. Warping may have been caused by interactions with satellite galaxies, intergalactic gas, or dark matter.“

The galactic disk’s thickness varies with increasing distance from the Galactic center.

Dr. Jan Skowron, the coauthor of the study said, “Cepheids’ age can be determined based on their pulsation periods which has allowed astronomers to perform an age tomography of the Milky Way. The youngest Cepheids are located near the Galactic center, while the eldest – near the Milky Way’s edge.”

“We found many elongated substructures in the disk composed of stars of similar age. This indicates that Cepheids located there must have formed around the same time in one of the spiral arms. However, Cepheids that were formed in a spiral arm do not currently follow the exact location of that arm, because rotation velocities of spiral arms and stars are slightly different.”

“The simulated and observed structures are strikingly similar. This shows that our idea about the recent history of the Galactic disk is plausible and can explain the structures we see.”