A new species of Allosaurus. 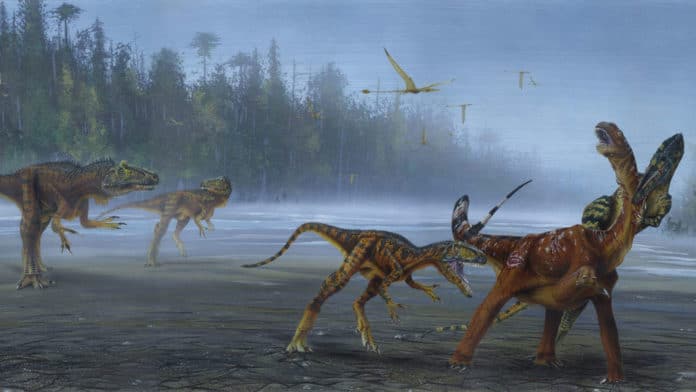 Scientists from the University of Utah have discovered new species Allosaurus jimmadseni, one of the best-known theropod dinosaurs from the Jurassic and a crucial taxon in phylogenetic analyses. They have found two species of Allosaurus, based on two nearly complete skeletons with superb skulls that provides new insight into the anatomy of this Late Jurassic meat-eater.

That creature is Allosaurus, reaching lengths of 29 feet and weights of 4000 lbs.

With its long arms, legs, and claws, the new-found allosaurus species is believed to have been the apex predator in its ecosystem when it existed in North America. A jimmadseni also had a short narrow skull that was relatively weaker with less of an overlapping vision compared to the A fragilis.

The greatest deposit of Allosaurus bones in the world is the Cleveland-Lloyd Dinosaur Quarry in Emery County, Utah. The remains of more than 50 Allosaurus have been discovered there.

Co-author of the study Daniel Chure said, “Recognizing a new species of dinosaur in rocks that have been intensely investigated for over 150 years is an outstanding experience of discovery. A jimmadseni is a great example of how much more we have to learn about the world of dinosaurs. Many more exciting fossils await discovery in the Jurassic rocks of the American West.”

The study is published in the journal Palentology and evolutionary science.

DON'T MISSTrojan Horse: A nanoparticle that eats away plaques that cause heart attacks
UP NEXTIndian scientists discovered a new way to fight TB

According to a new study by the Centre for Star and Planet Formation (StarPlan) at the Globe Institute at the University of Copenhagen,...
Read more
Science

For the first time in quantum physics, scientists from the University of Otago became successful in holding the individual atoms in place....
Read more