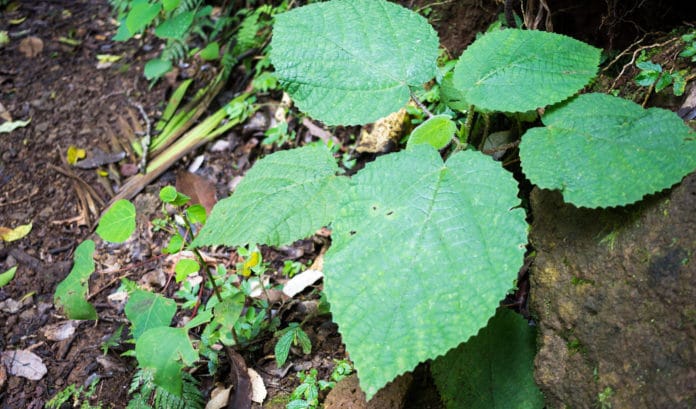 Australia is infamous for its dangerous animals. Though sharks, spiders, and snakes get the majority of bad press, it is an awesome array of predators and venomous critters that have earned Australia its fearsome reputation.

Not only animals, but some trees in Australia are also dangerous.

Yes, scientists from the University of Queensland have discovered ‘scorpion-like’ toxins secreted by a tree. The tree, which has broad oval- or heart-shaped leaves, is primarily found in rainforest areas of northeast Queensland.

These trees are called Gympie-Gympie in the Indigenous Gubbi Gubbi people’s language, and Dendrocnide in botanical Latin. The plant is shrouded in hollow needle-like hairs called trichomes, which are strengthened with silica. Like common nettles, these hairs contain poisonous substances; however, they probably have something extra to convey so much pain.

Scientists discovered that these dangerous plants could inject unwary wanderers with chemicals, much like those found in the stings of scorpions, spiders, and cone snails.

Scientists studied stinging hairs from the tree. They took extracts from the hairs and separated them into their molecular constituents.

One of these isolated fractions caused significant pain responses when tested in the laboratory. It contains a small family of related mini-proteins significantly larger in size than moroidin.

Scientists then isolated all the genes expressed in the Gympie-Gympie leaves to figure out which gene could create something with the size and fingerprint of our mystery toxin. They found molecules that can reproduce the pain response even when synthetically in the lab and applied in isolation.

Irina Vetter, an associate professor at the University of Queensland’s Institute for Molecular Bioscience, said, “The research team discovered a new class of neurotoxin miniproteins, which they christened ‘gympietides.'”

“Although they come from a plant, the gympietides are similar to spider and cone snail toxins in the way they fold into their 3D molecular structures and target the same pain receptors — this arguably makes the Gympie-Gympie tree a truly ‘venomous’ plant.”

“The long-lasting pain from the stinging tree may be explained by the gympietides permanently changing the sodium channels in the sensory neurons, not due to the fine hairs getting stuck in the skin.”

“By understanding how this toxin works, we hope to provide better treatment to those who have been stung by the plant, to ease or eliminate the pain.”

A new technique to demonstrate the time-reversal of optical waves

Genetic variations in the skin can create a natural sunscreen