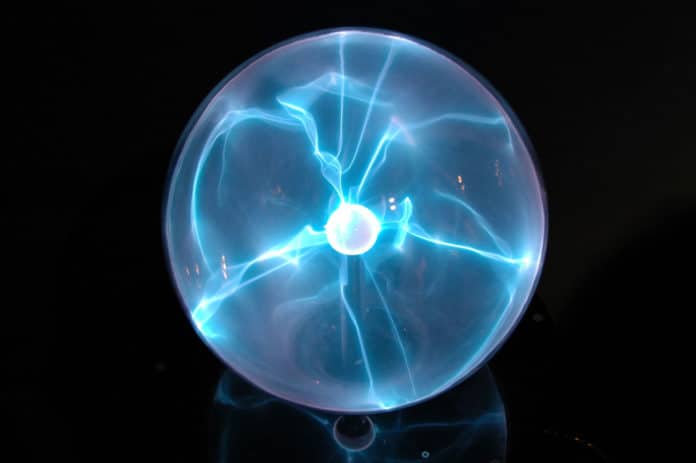 Most of the observable matter in the Universe, over almost all of the history of the universe, has been in the plasma state. In this state, normal atoms have had some or all of their electrons ripped away because of intense heating or collisions.

In order to study magnetized plasma jet, scientists at the physicists Lan Gao of the U.S. Department of Energy’s (DOE) Princeton Plasma Physics Laboratory (PPPL) and Edison Liang of Rice University, for the first time, have created a particular type of plasma form of coherent and magnetized plasma jet that could offer detail insights on much larger jets that stream from newborn stars and possibly black holes.

Scientists expect this may allow them to study astrophysical objects light years away.

Scientists used the OMEGA Laser Facility at the University of Rochester’s Laboratory for Laser Energetics (LLE) for the creation of jets. They aimed 20 of OMEGA’s individual laser beams into a ring-shaped area on a plastic target. Each laser created a tiny puff of plasma; as the puffs expanded, they put pressure on the inner region of the ring. That pressure then squeezed out a plasma jet reaching over four millimeters in length and created a magnetic field that had a strength of over 100 tesla.

Physicists Lan Gao of the U.S. Department of Energy’s (DOE) Princeton Plasma Physics Laboratory (PPPL) and Edison Liang of Rice University said, “This is the first step in studying plasma jets in a laboratory. I’m excited because we not only created a jet. We also successfully used advanced diagnostics on OMEGA to confirm the jet’s formation and characterize its properties.”

Scientists measure jet’s density, temperature, length, how well it stayed together as it grew through space, and the shape of the magnetic field around it, using diagnostic tools from LLE and the Massachusetts Institute of Technology (MIT). Using these quantifications, scientists were able to determine how the laboratory phenomena compare to jets in outer space. They also provide a baseline that scientists can tinker with to observe how the plasma behaves under different conditions.

Edison Liang of Rice University said, “This is groundbreaking research because no other team has successfully launched a supersonic, narrowly beamed jet that carries such a strong magnetic field, extending to significant distances. This is the first time that scientists have demonstrated that the magnetic field does not just wrap around the jet, but also extends parallel to the jet’s axis.”

Lan Gao of the U.S. Department of Energy’s (DOE) Princeton Plasma Physics Laboratory (PPPL) said, “The next step involves seeing whether an external magnetic field could make the jet longer and more collimated.”

“We would also like to replicate the experiment using the National Ignition Facility at Lawrence Livermore National Laboratory, which has 192 laser beams, half of which could be used to create our plasma ring. It would have a larger radius and thus produce a longer jet than that produced using OMEGA. This process would help us figure out under which conditions the plasma jet is strongest.”

The results of the study appeared in the Astrophysical Journal Letters.