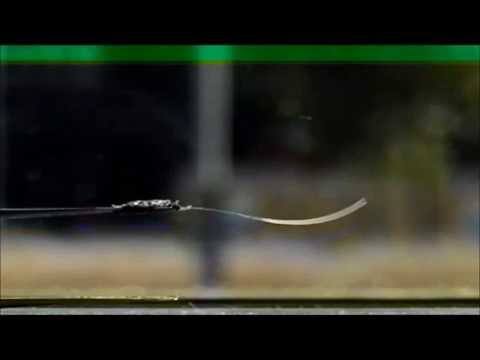 In our recent article ‘Fluorescent Polymer Gels to Detect Structural Failure in Energy-Related Equipment‘, we came to know about a gel that contains polymer materials. This gel can change color when they are shaken, heated, exposed to acid, or otherwise disorganized. This new material is like an effective sensor for detecting structural changes or atmospheric changes.

Researchers have discovered a plastic material that can automatically move under the influence of sunlight. This bendable kind of plastic can be appropriately used as a self-cleaning surface, for example for solar cells. This discovery has been done by researchers from Eindhoven University of Technology (TU/e) and the Humboldt University in Berlin.

The fact that materials can move by themselves under the influence of light is known for several years. Although, the necessary force of the source ‘ultraviolet light’ can become toxic for the material. Finding a material that mimics in the presence of sunlight was the toughest challenge for researchers. But, researchers got success in discovering a thin polymer layer that contains light-sensitive molecules. When exposed to sunlight, this thin film starts to oscillate automatically and irregularly.

Research yet can’t explain, why this plastic material moves in the presence of sunlight. Maybe it happens because of the combination of factors. The light-sensitive molecules are bound within the polymer network of crystals. That may be the reason for material oscillating as if confined. They move and stretch under the influence of visible light.

Application of this new plastic material:

This new plastic material can be used as a self-cleaning surface.

According to Debije, “It is difficult for sand and dust to stick to the surface that vibrates in the sunlight.”

Dick Broer, the assistant researcher, thinks that self-cleaning solar panels in the desert where there are no water supplies could be an option. But the researchers hope that there is also another range of varieties of other possible applications.

Debije said that “They are in such expectation that this will draw the attention of many researchers from whom we will be hearing a lot over the coming period.”

The unique mathematical physics of the singing saw