Computational approach may lead to a future treatment for coronavirus 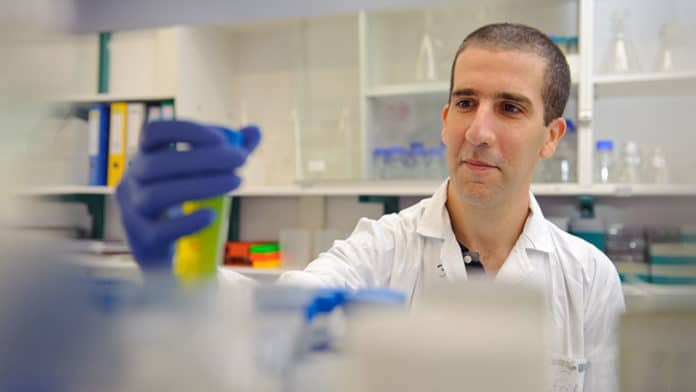 As the coronavirus pandemic spreads, Prof. Sarel Fleishman and his team in the Department of Biomolecular Sciences are deep into planning mode. Using a unique platform developed in their lab, they seek to address the coronavirus problem by designing and testing millions of “nanobodies”—small synthetic antibodies that could potentially slip through the coronavirus’s formidable defenses. Once the scientist’s home in on the most effective nanobodies, it may become possible to design a treatment capable of stopping this virus, which has already claimed thousands of lives worldwide.

A structural biologist, Prof. Fleishman, is the developer of computer modeling tools that support the rapid and inexpensive design of customized proteins for any number of desirable properties. Much of his design work focuses on antibodies—proteins that defend the body against such disease-causing invaders as viruses and bacteria. Now he is focused on a particular structural element in the coronavirus—the “spike protein” that was recently characterized by scientists at the University of Texas in Austin and which plays a key role in the infection process.

His goal is to design a robust antibody that would bind to vulnerable points on the spike protein and stop the infection in its tracks.

The potential impact of this design approach is illustrated by a recent breakthrough in the Fleishman lab against another infectious killer: the parasite Plasmodium falciparum, which causes malaria.

Prof. Fleishman’s lab invented a method that makes it possible to create computer-based models of proteins that do not exist in nature, but which, in the case of antibodies, might make them more effective or more stable so that they can be used in vaccines. The tools—which his lab made available online and that are now used by labs around the world—embody the current understanding of how proteins fold and function. These tools also predict how specific mutations would impact protein characteristics on the atomic level and how to combine these mutations to achieve a desired result.

Two years ago, an algorithm created by Dr. Adi Goldenzweig—then a Ph.D. student in the Fleishman lab—resulted in the design of a superior anti-malarial vaccine. Not only did the synthetic proteins they designed to provoke a protective immune response that short-circuited infection by the malaria parasite, but they were also cost-effective to produce, and remained stable at extremely high temperatures—a significant advantage in a vaccine designed mainly for impoverished populations living in tropical climates. Successfully tested in laboratory studies by Prof. Fleishman’s colleagues in the UK, the new proteins show great promise for similar success in the field and are being scaled up for release as a commercial vaccine.

Of course, antibodies that are perfectly primed to block coronavirus will not be easy to design. The spikes that drive infection are shielded by particularly complex structures known as glycans. To get past this glycan shield, Prof. Fleishman plans to massively expand a computational protocol already validated on a small scale in his lab.

Using the Weizmann Institute’s infrastructure for high-performance computing, the team, including doctoral student Lucas Krauss, and Drs. Ravit Netzer and Adi Goldenzweig, are not waiting to conduct further computational tests to see which of their “top-binders” should work the best. They plan to synthesize the millions of antibodies their algorithms suggest may be effective —a feat enabled by recent methods developed in the lab—and then to winnow down this massive set using experimental high-throughput screening technology.

The “finalists” will be tested for their ability to neutralize coronavirus samples—something that may lay the ground for a future treatment for COVID-19, and aid in developing a vaccine.

Men and women experience change while traveling in similar ways

Anxiety disorders had no effect on vaccine hesitancy