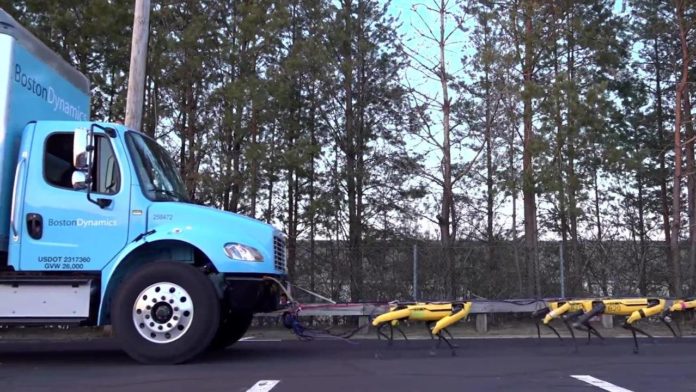 In the recent video from Boston Dynamics, they showed their four-legged robot dog SpotMini doing a new trick. By joining and leading a small army the Robots can move heavy objects together – for example pulling a truck.

The clip shows 10 specialized Spotmini derivatives called Spotpower hauling a box truck across a parking lot — and at a one-degree incline. There was a driver behind the wheel during the demonstration, probably to prevent accidents, but the vehicle itself was in neutral.

For many years Boston Dynamics has been developing advanced robots with remarkable behavior: mobility, agility, dexterity, and speed.

The company shared a video via YouTube with the description “It only takes 10 Spotpower (SP) to haul a truck across the Boston Dynamics parking lot (~1 degree uphill, truck in neutral). These Spot robots are coming off the production line now and will be available for a range of applications soon.”

Earlier SpotMini showed itself capable of picking up objects, opening doors, climbing stairs, and even dancing in a rhythm of the funky tune. The SpotMini weighs around 66 pounds and can run for up to 90 minutes, depending on what it’s doing. It has a maximum payload of 31 pounds — half of its own weight.

It could be used for warehouses or maybe even for search-and-rescue missions in the future.