Scientists have found the partial remains of a 152 million-year-old marine reptile—formally known as a pliosaur. 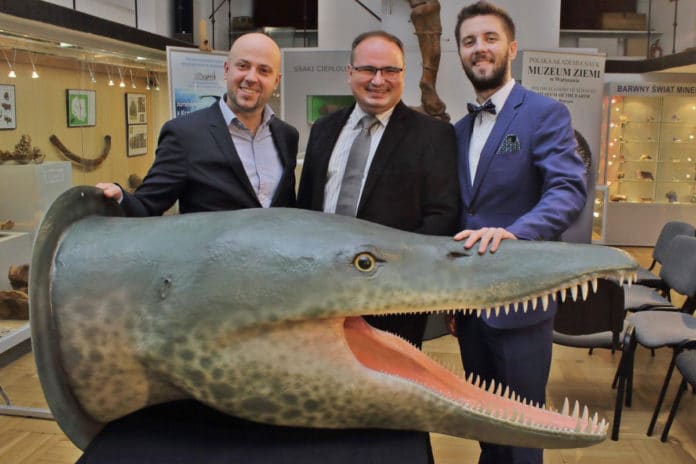 Paleontologists in the village of Krzyżanowice have recently discovered bones from pliosaurs, a huge Jurassic sea predator in a cornfield near Iłża (Mazowieckie). The pliosaurs were the largest marine predators living in Jura 150 million years ago.

Paleontologist Dr. Daniel Tyborowski from the Museum of the Earth of the Polish Academy of Sciences in Warsaw said, “They measured over 10 meters in length and could weigh up to several dozen tons. They had powerful, large skulls and massive jaws with large, sharp teeth. Their limbs were in the form of fins. We found bones of these pliosaurs in the north of the Świętokrzyskie Mountains.”

“Discoveries in the form of the remains of Jurassic pliosaurs are very rare. In Europe, they have been discovered only in a few countries, never before in Poland.”

The fossilized remains of a surprising assemblage of creatures from the Late Jurassic period, including the skull and teeth fragments from a large pliosaur. Along with pliosaur bones, paleontologists also discovered the remains of several other animal species, including plesiosaurs (long-necked cousins of pliosaurs), turtles, and ancestors of modern-day crocodiles. In total, several hundred bone remains were counted.

Tyborowski noted, “Sea turtles ate large snails, while they fell prey to large crocodiles. We know this because we found teeth marks left by those reptiles on turtle shells. On the other hand, powerful pliosaurs hunted all animals whose fossils we discovered at this site.”

“The research on the newly discovered cluster of fossilized remains of Jurassic animals in Krzyżanowice is just the beginning. We hope that the next months and years will bring even richer material in the form of bones of large reptiles.”

A study is published in the Proceedings of the Geologists’ Association.