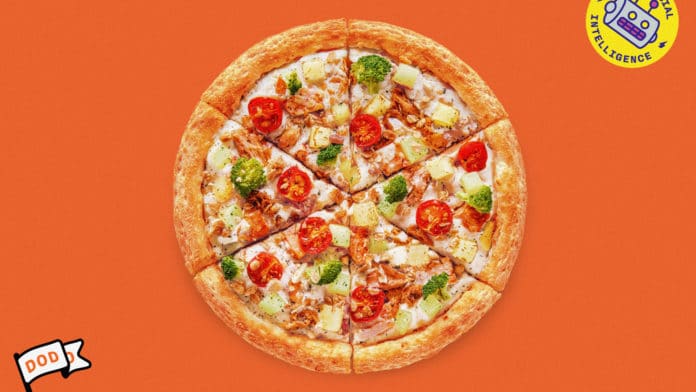 “Open Source” pizza was an experiment aimed at proving the hypothesis that tastes, though considered entirely subjective, could be quantified and that AI could be trained to find uncommon ingredient combinations that would taste well together for most people.

To train AI, Dodo used the dataset of over 300,000 recipes along with the results of “Flavor network and the principles of food pairing” study published in The Nature in 2011. The study found that Western cuisines showed a tendency to use ingredient pairs that shared many flavor compounds. That finding was key to selecting recipes generated by Dodo’s AI.

As usual, the problem was to collect the dataset. The recipe datasets available are very limited, so Dodo scanned user generated recipes on culinary websites, often with mistakes and typos. The overall number of recipes searched through amounted to 300,000.

Initially, there were over 100,000 unique ingredients. The data cleaned up, however, only 1,000 unique positions were left. To present the recipe in a form that would be understandable to the neural network, Dodo used Skip-Gram Negative Sampling (SGNS) — an algorithm of word2vec based on the word occurrence in a specific context.

After AI had been trained in creating pizza recipes, Dodo added flavor combinations criteria based on the 2011 study mentioned above. By adjusting coefficients, AI can produce both traditional recipes (Margaritas or Pepperoni) and unusual recipes of which the “Open Source” pizza is a great example.

AI code was shared through Github enabling every small restaurant in the world to become part of the AI revolution and win customers in the competition with bigger restaurants. Dodo is dreaming of making all the pizza in the world taste better rather than just making only Dodo’s pizza taste better. That was Dodo’s idea when creating AI and “Open Source” pizza transcending individual tastes.

On October 10, Dodo ran the “Open Source” pizza day in Moscow showcasing the AI pizza. Dodo has got favorable reviews from both its customers and industry peers. Dodo’s customers commented that the pizza tasted “unusual”, “surprising”, “tasty, cool, sweet, with lots of tastes”.

Dodo Pizza is a Russian-born global pizza delivery franchise operating in 12 countries all over the world. In 2019, Dodo is an international restaurant chain represented by over 500 stores across 12 countries, including China, US and the UK.

Here is the link to the “Open Source” pizza website ai.dodopizza.com.

Could AI Help Clinicians to Predict Alzheimer’s Disease Before It Develops?