Traveling to the Sun: Why won’t Parker solar probe melt?

How NASA's Solar Probe will Survive the Sun? 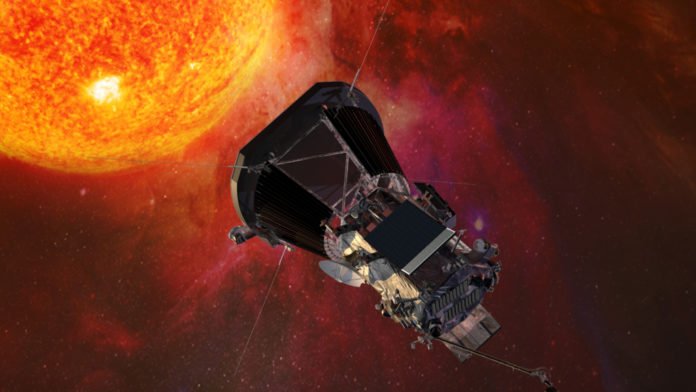 This summer, NASA’s Parker Solar Probe will launch to travel closer to the Sun, deeper into the solar atmosphere. The main objective of the mission is to revolutionize our understanding of the sun.

The probe will trace how energy and heat move through the solar corona and to explore what accelerates the solar wind as well as solar energetic particles. In addition, it will provide unprecedented observations of what drives the wide range of particles, energy, and heat that course through the region — flinging particles outward into the solar system and far past Neptune.

The spacecraft will travel through the material with temperatures greater than a million degrees Fahrenheit while being bombarded with intense sunlight.

Parker Solar Probe has been intended to withstand the extreme conditions and temperature variances for the mission. The key lies in its custom warmth shield and a self-ruling system that shields the mission from the Sun’s extreme light outflow, yet allows the coronal material to “touch” the spacecraft.

In space, the temperature can be a great many degrees without giving critical heat to a given protest or feeling hot. Why? Temperature measures how quick particles are moving, while heat measures the aggregate sum of vitality that they exchange.

The corona through which Parker Solar Probe flies, for example, has an extremely high temperature but very low density. Think of the difference between putting your hand in a hot oven versus putting it in a pot of boiling water (don’t try this at home!) — in the oven, your hand can withstand significantly hotter temperatures for longer than in the water where it has to interact with many more particles. Similarly, compared to the visible surface of the Sun, the corona is less dense, so the spacecraft interacts with fewer hot particles and doesn’t receive as much heat.

That means that while Parker Solar Probe will be traveling through space with temperatures of several million degrees, the surface of the heat shield that faces the Sun will only get heated to about 2,500 degrees Fahrenheit (about 1,400 degrees Celsius).

Parker solar probe makes use of a heat shield known as the Thermal Protection System, or TPS, which is 8 feet (2.4 meters) in diameter and 4.5 inches (about 115 mm) thick. Those few inches of protection mean that just on the other side of the shield, the spacecraft body will sit at a comfortable 85 F (30 C).

The TPS is composed of a carbon composite froth sandwiched between two carbon plates. This lightweight protection will be joined by a completing dash of white earthenware paint on the sun-facing plate, to reflect however much heat as could be expected. Tried to withstand up to 3,000 F (1,650 C), the TPS can deal with any warmth the Sun can send its direction, protecting all instrumentation.

The probe also consists of Solar Probe Cup also known as Faraday cup. It mimics as a sensor to quantify the ion and electron fluxes and flow angles from the solar wind.

The cup itself is made from sheets of Titanium-Zirconium-Molybdenum, an alloy of molybdenum, with a melting point of about 4,260 F (2,349 C). The chips that produce an electric field for the Solar Probe Cup are made from tungsten, a metal with the highest known melting point of 6,192 F (3,422 C). Normally lasers are used to etch the gridlines in these chips — however, due to the high melting point acid had to be used instead.

When it comes to electronic wiring, scientists used sapphire crystal tubes to suspend the wiring and made the wires from niobium.

To make sure the instrument was ready for the harsh environment, the researchers needed to mimic the Sun’s intense heat radiation in a lab. To create a test-worthy level of heat, the researchers used a particle accelerator and IMAX projectors — jury-rigged to increase their temperature.

The projectors mimicked the heat of the Sun, while the particle accelerator exposed the cup to radiation to make sure the cup could measure the accelerated particles under the intense conditions. To be absolutely sure the Solar Probe Cup would withstand the harsh environment, the Odeillo Solar Furnace — which concentrates the heat of the Sun through 10,000 adjustable mirrors — was used to test the cup against the intense solar emission.

Justin Kasper, principal investigator for the SWEAP instruments at the University of Michigan in Ann Arbor said, “The Solar Probe Cup passed its tests with flying colors — indeed, it continued to perform better and give clearer results the longer it was exposed to the test environments. We think the radiation removed any potential contamination. It basically cleaned itself.”

There are several other approaches that solar probe used to shelter from the heat. For example, the solar arrays that retract behind the heat shield’s shadow, leaving only a small segment exposed to the Sun’s intense rays.

The solar arrays have a surprisingly simple cooling system: a heated tank that keeps the coolant from freezing during launch, two radiators that will keep the coolant from freezing, aluminum fins to maximize the cooling surface, and pumps to circulate the coolant. The cooling system is powerful enough to cool an average sized living room, and will keep the solar arrays and instrumentation cool and functioning while in the heat of the Sun.

The coolant used for the system? About a gallon (3.7 liters) of deionized water. While plenty of chemical coolants exist, the range of temperatures the spacecraft will be exposed to varies between 50 F (10 C) and 257 F (125 C). Very few liquids can handle those ranges like water. To keep the water from boiling at the higher end of the temperatures, it will be pressurized so the boiling point is over 257 F (125 C).

In this way, the probe is designed to autonomously keep itself safe and on track to the Sun. Several sensors, about half the size of a cell phone, are attached to the body of the spacecraft along the edge of the shadow from the heat shield. If any of these sensors detect sunlight, they alert the central computer and the spacecraft can correct its position to keep the sensors, and the rest of the instruments, safely protected. This all has to happen without any human intervention, so the central computer software has been programmed and extensively tested to make sure all corrections can be made on the fly.

Cosmic Spider, a mysterious source of gamma rays, has been found