This chemical species may play a fundamental role in the formation of amino acids, among the key ingredients for life as we know it. 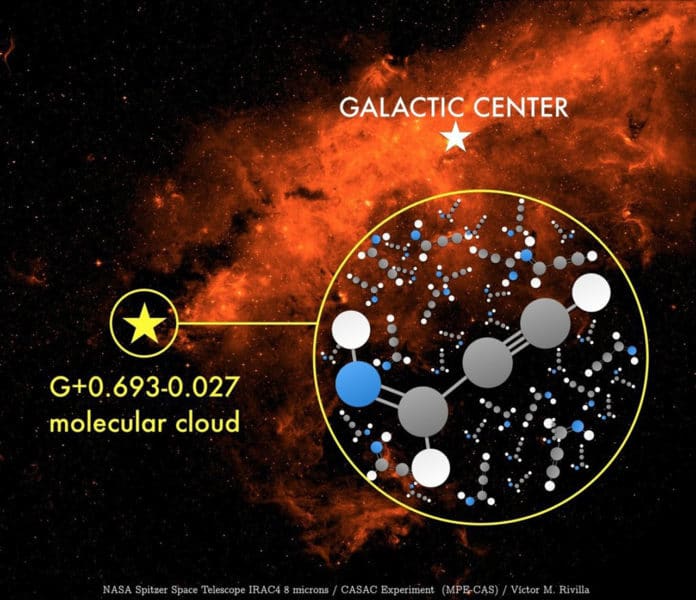 In the molecular cloud known as G+0.693-0.027, which lies close to the Galactic center, scientists have identified a new molecule called propargylimine. According to scientists, propargylimine might have a vital role in the formation of amino acids, among the critical ingredients for life.

The study was conducted by the Max Planck Institute for Extraterrestrial Physics (MPE) in Munich, together with astronomical observations conducted by the Italian National Institute of Astrophysics (INAF) and the experiments were performed at the Centre for Astrochemical Studies (CAS).

Propargylimine is an unstable compound and difficult to isolate it in the ordinary conditions of the Earth’s atmosphere. Still, it thrives at low densities and temperatures typical of the interstellar medium.

Luca Bizzocchi, the study’s lead author who studied the molecule spectroscopy at MPE, explained: “The peculiarity of this chemical species lays in its carbon-nitrogen double bond, which gives it a high reactivity. With this double bond, it becomes a fundamental constituent of the chemical chains that lead from the simplest and most abundant molecules in space containing carbon and nitrogen – for example formaldehyde (H2CO) and ammonia (NH3), respectively – to the more complex amino acids, the fundamental building blocks of terrestrial biology.”

“As a molecule rotates in the interstellar medium, it emits photons at exact frequencies. This information, when combined with data from radio telescopes, allows us to know whether a molecule is present in the molecular clouds, the sites of star and planet formation.”

Scientists compared the laboratory data with the results of observations taken at the 30m radio telescope in Sierra Nevada, Spain.

Víctor M. Rivilla M, a Marie Skłodowska-Curie research fellow at INAF Florence, who led the INAF observational effort that resulted in the confirmation of propargylimine in the G+0.693-0.027 environment said, “Our molecule was already there. It was lying in our data of the G+0.693-0.027 molecular cloud, but we couldn’t identify it without knowing its precise spectroscopy, which is the full description of its emission frequency pattern. As soon as we got it, thanks to the measurements in the laboratory, we realized that the propargylimine was undoubtedly there, waiting for someone to recognize it.”

A breakthrough in frequency up-conversion of single photons