Ghost imaging with the human eye. 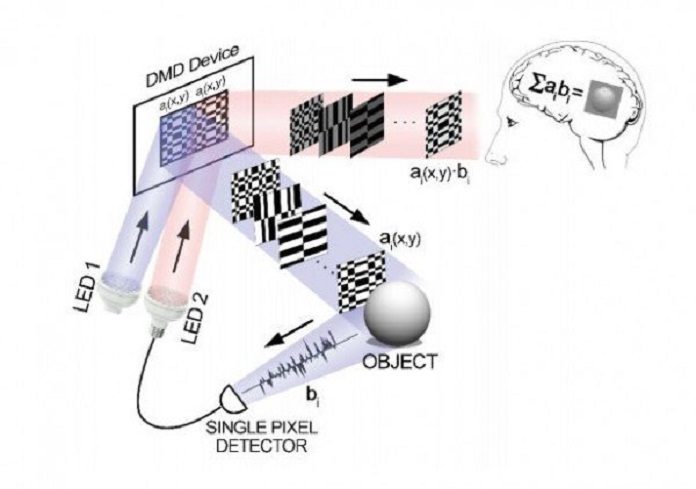 Ghost imaging has been a subject of interest to the quantum optics community for the past 20 years. Initially seen as a manifestation of quantum spookiness, it is now recognized as being implementable in both single- and many-photon number regimes.

The technique of ghost imaging produces high-resolution images using single-pixel cameras and light. Though, it mainly depends on clever algorithms to crunch the apparently irregular information that a solitary pixel seems to accumulate.

Now, Alessandro Boccolini at Heriot-Watt University in Edinburgh, Scotland along with his colleagues has demonstrated that humans can see ghost images and suggest how the technique can be used to study and exploit the visual system in entirely new ways.

Ghost imaging works by anticipating a random pattern of light onto an object and recording the reflected light with a single pixel. Rehashing this procedure with different random patterns of light delivers a grouping of information focuses on how the light force fluctuates after some time.

It’s easy to think these data points must vary at random. But they are actually correlated because the light reflects off the same object. So crunching the data in the right kind of way can reveal this correlation: an image of the object.

Not such a lot of processing need be done on a computer. One easy route is to utilize the signal from the single pixel to tweak the light yield from another LED. This is then anticipated onto a similar random pattern and the procedure rehashed for the next pattern and so on.

The image of the object— the ghost image —would then be able to be reproduced by incorporating the reflected light from a long grouping of random patterns lit up. Curiously, the subsequent image is shaped by the light that has never cooperated with the original object.

Now, scientists are investigating whether the human visual system can perform this integration process. Their idea is to project the patterns in quick succession onto a screen that somebody is watching and then see if the person’s visual system will combine them.

Through this effect, scientists can gather a sequence of still images as continuous movement. Be that as it may, it is in no way, shape or form evident that the visual system will coordinate the irregular patterns, every one of which is a random arrangement of black and white of highly contrasting pixels called a Hadamard pattern.

The only way to find out is to try the experiment on some willing victims. Boccolini and co asked four human subjects to view the projected patterns. These guinea pigs could change the rate at which the patterns appeared to see how this changed their experience.

Scientists noted, “The results are fascinating. When the patterns appear at a relatively slow rate, the human eye sees only a set of square pixels. But when the rate crosses some threshold, the image of the object suddenly appears.”

“All four subjects could see the object at this rate. So the visual system must be integrating a sequence of images in a specific way. But the image quickly degrades when the rate falls below 200 patterns per 20 milliseconds.”

Boccolini said, “We use this human ghost imaging technique to evaluate the temporal response of the eye and establish the image persistence time to be around 20 ms followed by a further 20 ms exponential decay.”

He explained, “The fact that the eye never interacts with light that has hit the object opens up some fascinating possibilities, not least the prospect of illuminating the object with one wavelength and then perceiving it at another. Indeed, the illuminating wavelength need not be visible by the human eye.”

“Ghost-imaging with the eye opens up a number of completely novel applications such as extending human vision into invisible wavelength regimes in real time. This requires no additional viewing screen or computational steps since the human vision system does almost all the work.”

The study is published in the journal Neurons and Cognition.