Planthopper bugs may be small, but they attract mates from afar by sending vibrational calls along plant stems and leaves using fast, rhythmic motions of their abdomen. 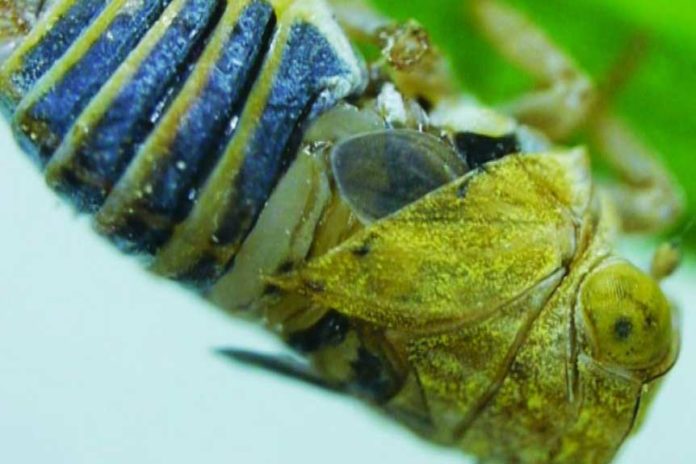 Planthoppers, any member of several insect families of the order Homoptera, easily recognized because of the hollow, enlarged head extension that may appear luminous. Ranging in size from 1 cm in cooler climates to about 5 cm in the tropics, they attract mates from afar by sending vibrational calls along plant stems and leaves using fast, rhythmic motions of their abdomen, suggests a new study.

The study conducted by the scientists at the University of Oxford enlightens how small animals can communicate at a distance despite the constraints of small body size.

Producing vibrations that will travel well along plant material requires the sudden release of mechanical energy – many times faster than could be achieved through the direct action of the planthoppers’ tiny muscles.

The secret lies in the fast release of stored elastic energy, rather like a catapult, but with the key difference that the stored energy is released cyclically, leading to the repetitive up-down motion of the abdomen. This is accomplished by a complex anatomical structure that the researchers call the “snapping organ”, because of the speed with which it snaps open and closed.

Lead author from the Department of Zoology, Leonidas-Romanos Davranoglou, said: “I was studying 3D images of planthoppers that I had collected using X-ray imaging in a particle accelerator, trying to understand the evolutionary relationships between different groups. But as I dissected the bugs in virtual reality on my computer, I immediately realized that I was looking at something entirely new, so decided to investigate further.”

For the study, scientists collected hundreds of live planthoppers from the hills around Athens, which they brought back to their Oxford lab to conduct experiments. To understand the vibration generation mechanism of the new snapping organ, they used microtomography, laser vibrometry, confocal microscopy, and high-speed video recordings.

They then developed a mathematical model of the mechanism. The vibratory organ was found to be present in all of the many different families of planthoppers. It suggests the entire group of bugs use this unusual form of communication.

Senior author Dr. Beth Mortimer, Department of Zoology, said: “These insects include several economically important pest species, including the brown planthopper, which is one of the most serious pests on rice in the developing world. Understanding how these insects signal to each other may help in disrupting their communication channels or detecting their calls.”

“Silent to the ear, the planthoppers have come up with their own novel way to communicate with potential mates. You could say it’s their form of snap chat.”

Scientists noted, “While the discovery of the snapping organ is new, the method is an extremely old mechanism of communication, dating back at least 250 million years, to the dawn of planthopper evolution.”

The study is published in the open-access journal PLOS Biology.

This drug could improve heart function in diabetic people