It shows a combination of primitive marine chelicerate. 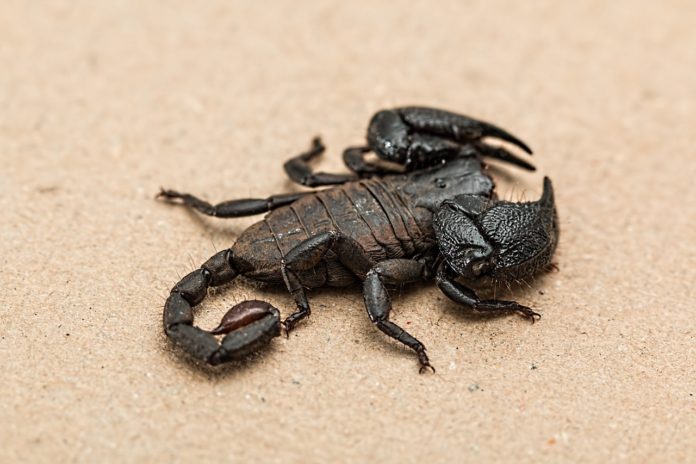 Scorpions are among the first creatures to have become entirely terrestrialized. Their early fossil record is constrained, and fundamental questions, including how and when they adapted to life on land, have been difficult to answer.

Scientists now described a new exceptionally preserved fossil scorpion from the Waukesha Biota, of Wisconsin, USA. This is the earliest scorpion yet reported, and it shows a combination of primitive marine chelicerate and derived arachnid characteristics.

Jason Dunlop, curator of arachnids at Berlin’s Natural History Museum, said in a statement, “Anything that pushes the origins of arachnids back further is significant. That’s because arachnids are the second most diverse group of animals after insects, and thus could shed light on the origin of spiders, ticks, mites, and modern-day scorpions.”

Named, Parioscorpio Venator, meaning ‘ancestral scorpion and hunter,’ this ancient predator measures 2.5 centimeters (0.98 inches) in length and is thought to have lived about 437 million years ago. Internal anatomy, including parts of the respiratory, circulatory (vascular and lacunar) and digestive systems, has been preserved and provides insight into a group that terrestrialized early in its evolutionary history.

Dr. Andrew J Wendruff, a paleontologist at Otterbein University, Ohio, and co-author of the research said, “Such structures, as well as other features of the animal’s cardiovascular system, suggested the ancient animal was, like modern scorpions, able to breathe air. T the features are also similar to those seen in horseshoe crabs, which live in shallow coastal waters but can venture on to land for brief spells.”

“The fossil was found in a shallow water setting, and so it is likely this animal lived in both environments.”

Dr. Dunlop, said, “The preservation of some of the scorpion’s internal structures, such as the cardiovascular system, is unusual.”

“This is very rare in fossils of this age and suggests that in some aspects of their anatomy, scorpions have hardly changed in almost 440m years.”

Dr. Jesus Lozano-Fernandez, a palaeobiologist at the Institute of Evolutionary Biology of Barcelona, said, “it was a matter of much debate whether the earliest scorpions were indeed aquatic – a theory the discovery piled further doubt on.”

“If the described fossil scorpion were indeed terrestrial, that would suggest that [other arachnids with similar breathing apparatus such as spiders], at least, or even the whole [of] arachnids would already have colonized the land by that time.”

This discovery is published in the journal Scientific Reports.