Hope for the prospect of a combination treatment strategy to tackle certain antibiotic-tolerant infections. 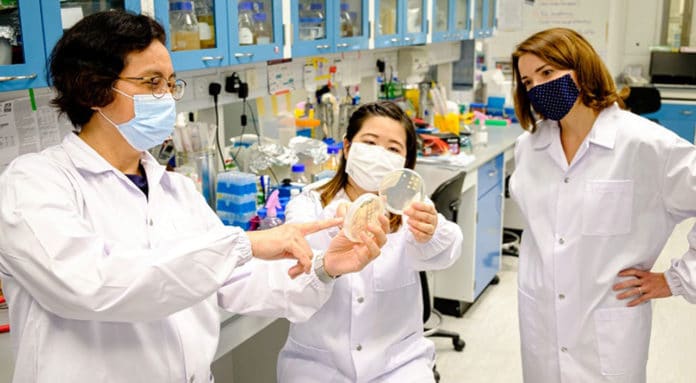 Antibiotic resistance is a threat to global public health and sustainability. Antibiotic resistance currently accounts for an estimated 70,000 annual deaths globally. In the absence of new therapeutics, infections caused by resistant “superbugs” could kill an additional 10 million people each year worldwide by 2050, surpassing cancer.

Without new therapeutics, infections caused by resistant superbugs kill an extra 10 million people every year worldwide by 2050, surpassing cancer. Antibiotic resistance arises in bacteria when they can perceive and prevent drugs that would otherwise kill them, from going through their cell wall.

This threat is accelerated by the developing COVID-19 pandemic, with patients admitted to hospitals often accepting antibiotics to keep secondary bacterial infections in check, intensifying the opportunity for resistant pathogens to emerge and spread.

Scientists at the NTU Singapore now have come up with an antimicrobial peptide known as CSM5-K5 comprising repeated units of chitosan, a sugar found in crustacean shells that bears structural resemblance to the bacterial cell wall, and repeated units of the amino acid lysine.

The similarity in chitosan’s structure to the bacterial cell wall will help the peptide in interacting with and embed itself in it. It will lead to defects in the wall and membrane that eventually kill the bacteria.

Scientists performed experiments with peptide on biofilms, which are slimy coats of bacteria that can cling onto surfaces such as living tissues or medical devices in hospitals, and which are difficult for traditional antibiotics to penetrate.

The experiment revealed that the peptide killed at least 90 percent of the bacteria strains in four to five hours.

Another experiment with antibiotics revealed that more bacteria were killed off as compared to when CSM5-K5 was used alone. It suggests that the peptide rendered the bacteria susceptible to antibiotics.

The number of antibiotics used in this combination therapy was also at a concentration lower than what is commonly prescribed.

Assoc Prof Kimberly Kline, a Principal Investigator at the Singapore Centre for Environmental Life Sciences Engineering (SCELSE) at NTU, said: “Our findings show that our antimicrobial peptide is effective whether used alone or in combination with conventional antibiotics to fight multidrug-resistant bacteria. Its potency increases when used with antibiotics, restoring the bacteria’s sensitivity to drugs. More importantly, we found that the bacteria we tested developed little to no resistance against our peptide, making it an effective and feasible addition to antibiotics as a viable combination treatment strategy as the world grapples with rising antibiotic resistance.”

Prof Mary Chan, director of NTU’s Centre of Antimicrobial Bioengineering, said: “While efforts are focussed on dealing with the COVID-19 pandemic, we should also remember that antibiotic resistance continues to be a growing problem, where secondary bacterial infections that develop in patients could complicate matters, posing a threat in the healthcare settings. For instance, viral respiratory infections could allow bacteria to enter the lungs more easily, leading to bacterial pneumonia, which is commonly associated with COVID-19.”

Kline said, “Antimicrobial peptides, which carry a positive electric charge, typically work by binding to the negatively-charged bacterial membranes, disrupting the membrane and causing the bacteria to die eventually. The more positively charged a peptide is, the more efficient it is in binding to bacteria and thus killing them.”

“However, the peptide’s toxicity to the host also increases in line with the peptide’s positive charge – it damages the host organism’s cells as it kills bacteria. As a result, engineered antimicrobial peptides to date have met with limited success.”

This new peptide can cluster together to form nanoparticles when it is applied to bacteria biofilms. This clustering led to a more concentrated disruptive effect on the bacterial cell wall when compared to the activity of single chains of peptides, meaning it has high antibacterial activity but without causing undue damage to healthy cells.

When CSM5-K5 was used with conventional antibiotics, the NTU team found that the combination approach led to a further reduction in the bacteria in both lab-formed biofilms and infected wounds in mice as compared to when only CSM5-K5 was used, suggesting that the antimicrobial peptide made the bacteria sensitive to the drugs they would otherwise be resistant to.

Prof Chan said: “Developing new drugs alone is no longer sufficient to fight difficult-to-treat bacterial infections, as bacteria continue to evolve and outsmart antibiotics/ It is important to look at innovative ways to tackle difficult-to-treat bacterial infections associated with antibiotic resistance and biofilms, such as tackling the bacteria’s defense mechanisms. A more effective and economical method to fight bacteria is through a combination therapy approach like ours.”