A new class of pentaquarks has been discovered

The findings could lead to a new understanding of the structure of matter in the universe. 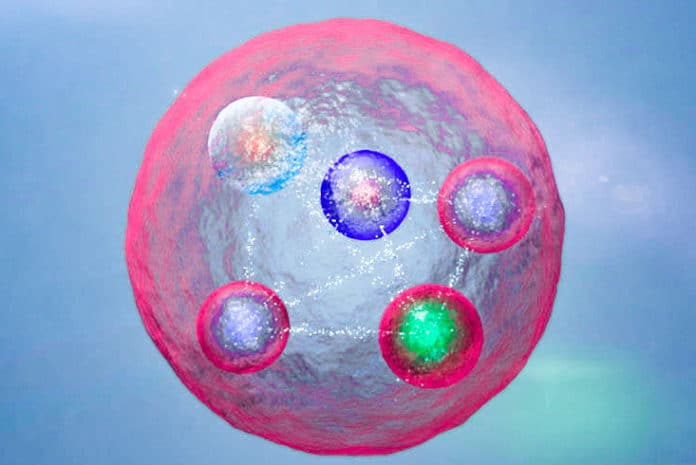 Until now, we used to thought that a pentaquark was made up of five quarks by sticking together. But now, a new study has uncovered new information about pentaquarks suggesting three never-before-seen pentaquarks, each divided into two parts.

Tomasz Skwarnicki, professor of physics in the College of Arts and Sciences at Syracuse University, has studied fundamental particles and forces in the Universe. Most of his work- along with his team of researchers, including members of Syracuse’s High-Energy Physics (HEP) Group- takes place at the CERN laboratory, whose LHC is the biggest, most powerful particle detector in the world.

It is within the LHC that protons are flung together at high energies, only to collide with one another. What lies inside the particles, when cracked open, helps scientists probe the mysteries of the fundamental universe.

Studying proton collisions from 2015-18, Skwarnicki has confirmed the existence of substructure within a pentaquark. The giveaway, he says, was a trio of narrow peaks in the LHC kinematic data.

Each peak refers to a particular pentaquark–specifically, one divided into two parts: a baryon, containing three quarks, and a meson, with two quarks.

The peak also suggests a short-lived phenomenon called resonance. The phenomenon takes place when protons (a type of baryon) meet–or, more accurately, glide into one another–during an LHC collision.

Skwarnicki said, “What is unique about each of these three pentaquarks is that its mass is slightly lower than the sum of its parts–in this case, the masses of the baryon and meson. The pentaquark didn’t decay by its usual easy, fall-apart process. Instead, it decayed by slowly and laboriously rearranging its quarks, forming a narrow resonance.”

Seeing how particles interface with and tie together is Skwarnicki’s specialty. In 2015, he and after that Ph.D. student Nathan Jurik G’16, Distinguished Professor Sheldon Stone and Zhang stood out as truly newsworthy with their job in LHCb’s recognition of a pentaquark. Estimated 50 years sooner, their revelation drew on LHC information from 2011-12.

LHCb’s most recent information used an energy beam that was about twice as solid. This technique joined with progressively refined data- selection criteria, delivered a more prominent scope of proton collisions.

Skwarnicki said, “It also gave us 10 times more data and enabled us to observe pentaquark structures more clearly than before. What we thought was just one pentaquark turned out to be two narrow ones, with little space between them.”

“The data also revealed a third “companion” pentaquark. “All three pentaquarks had the same pattern–a baryon with a meson substructure. Their masses were below appropriate the baryon-meson thresholds.”

In addition to Skwarnicki and Stone, HEP includes Professors Marina Artuso and Steven Blusk and Assistant Professor Matthew Rudolph. The group currently is building an apparatus on campus called the Upstream Tracker (UT), being shipped to and installed at CERN next year as part of a major LHCb upgrade.

Skwarnicki said, “The UT will significantly enhance LHCb, which is composed of about 10 different sub-detectors. I am hopeful that the UT will lead to more discoveries.”

Skwarnicki is excited about LHCb because it helps explain how the smallest constituents of matter behave. His latest discovery, for instance, proves that pentaquarks are built the same way as protons and neutrons, which are bound together in the nucleus of an atom.

“Pentaquarks may not play a significant role in the matter we are made of,” he says, “but their existence may significantly affect our models of the matter found in other parts of the universe, such as neutron stars.”

A new map of the universe displays the entire known cosmos