A recent NASA long-duration balloon mission observed these clouds over the course of five days at their home in the mesosphere. 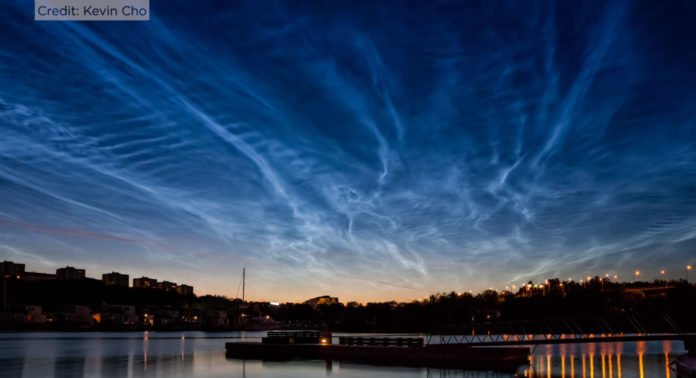 On July 8, 2018, NASA‘s PMC (polar mesospheric clouds) Turbo mission propelled a giant balloon to ponder PMCs at a height of 50 miles over the surface. For five days, the balloon floated through the stratosphere from its dispatch at Esrange, Sweden, over the Arctic to Western Nunavut, Canada.

Amid its flight, cameras on board the balloon caught 6 million high-resolution pictures topping off 120 terabytes of data storage. This could reveal the process that leads to turbulence in the atmosphere.

Dave Fritts, principal investigator of the PMC Turbo mission at Global Atmospheric Technologies and Sciences in Boulder, Colorado said, “From what we’ve seen so far, we expect to have a really spectacular dataset from this mission. Our cameras were likely able to capture some really interesting events and we hope will provide new insights into these complex dynamics.”

Noctilucent clouds coalesce as ice crystals on small meteor leftovers in the upper atmosphere. The outcomes make splendid blue rippling clouds that are noticeable soon after the Sun sets in polar regions amid the summer. These clouds are influenced by what’s known as atmospheric gravity waves — caused by the convecting and uplifting of air masses, for example, when air is pushed up by mountain ranges. The waves assume significant jobs in exchanging vitality from the lower atmosphere to the mesosphere.

Fritts said, “This is the first time we’ve been able to visualize the flow of energy from larger gravity waves to smaller flow instabilities and turbulence in the upper atmosphere. At these altitudes, you can literally see the gravity waves breaking — like ocean waves on the beach — and cascading to turbulence.”

The PMC Turbo balloon payload was equipped with seven specially designed imaging systems to observe the clouds. Each included a high-resolution camera, a computer control and communications system, and 32 terabytes of data storage. The seven imaging systems were arranged to create a mosaic of wide views extending one hundred miles across, with each narrow views able to image turbulence features as small as 20 yards wide. For the first time, a lidar — or laser radar — measured the precise altitudes of the PMCs as well as the temperature fluctuations of the gravity waves above and below the PMCs.

Bernd Kaifler, the researcher at the German Aerospace Center, in Wessling, Germany said, “We know the 2D wave structure from the images, but in order to fully describe the waves we need to measure the third dimension as well. From the lidar measurements, we can infer the vertical structure of the waves, thus providing important data which would have not been available from the imaging experiment alone.”

Finding out about the circumstances and end results of turbulence will enable researchers to comprehend not just the structure and variability of the upper atmosphere, however different areas too. Turbulence happens in fluids over the universe and the outcomes will enable researchers to all the more likely model it in all systems. Eventually, the outcomes will even help enhance weather forecast models.

Understanding an extensive variety of procedures in close Earth space — incorporating how they cooperate with Earth’s atmosphere and climate — is a key piece of NASA’s heliophysics research about, which utilizes a full squad of satellites and sub-orbital instruments to observe diverse marvels from alternate points of view.

NASA additionally examines noctilucent mists with the Aeronomy of Ice in the Mesosphere, or AIM, shuttle, which propelled in 2007 into a low-Earth orbit. AIM tracks extensive scale includes in the clouds over a worldwide scale, however, can just purpose includes several miles over. PMC Turbo helps fill in the points of interest, clarifying what occurs at littler scales where turbulence happens.

The PMC Turbo payload was successfully recovered from its landing site in the Canadian Arctic and the recovered instruments are expected to contribute to future missions, including one anticipated to fly next December over Antarctica.