A team of NUS researchers has developed a novel technology that could sensitively and accurately detect and classify cancer cells, as well as determine the disease aggressiveness from the least invasive biopsies. With this new technology called STAMP (Sequence-Topology Assembly for Multiplexed Profiling), comprehensive disease information can be obtained faster, at a much earlier stage of the clinical workflow, allowing doctors to decide and administer treatments earlier and more effectively.

A biopsy, which involves removing a small amount of tissue from the body, is the main way for doctors to diagnose most cancers. While less invasive biopsy procedures are preferred, they can yield insufficient samples, resulting in incomplete and/or inconclusive diagnosis. A definitive diagnosis and further analysis such as cancer staging can only be made post-surgery; this long-waited information is then used to guide subsequent treatment decisions.

The STAMP technology overcomes many challenges of this clinical workflow to enable early and informative cancer diagnostics. STAMP uses programmable DNA barcodes to measure billions of protein markers in a single test – the amount as well as the distribution of these protein markers in a cell – from a small clinical sample. Using breast cancer as a model, STAMP achieves a high diagnostic accuracy of above 94 per cent, comparable with gold-standard tissue pathology, and reveals important clinical information which currently can only be obtained through post-surgery tissue analysis – all directly from a fine needle aspiration (FNA) biopsy, the least invasive form of biopsy.

“Our STAMP technology leverages the unique properties of DNA to form 3D barcodes. These barcodes can be used to measure diverse protein markers as well as detect the markers’ specific locations in cells. By mapping these marker distribution patterns in cells, STAMP can provide an early indication of disease aggressiveness. Current pathology techniques only measure a small subset of protein markers and require several days of extensive processing. In comparison, STAMP is a million times more sensitive, provides highly informative analysis from scarce samples, and can be completed in as little as two hours,” said Asst Prof Shao.

The team’s technology breakthrough was published by the prestigious scientific journal Nature Biomedical Engineering. The study was also featured in News & Views by the journal and selected as the cover story for its September 2019 issue.

Tracks billions of protein markers in a single test

Comprehensive analysis of protein expression and distribution holds great promise for discovery of biomarkers, early disease detection, and rationalising of treatment options. However, current approaches involve imaging and microscopy techniques, which are complex, time-consuming, and have a limited multiplexing capability. STAMP was conceptualised and developed to address these challenges.

The blueprint of life, DNA exists in nature as long ‘ribbons’ to store massive genetic information through its combination of base codes. Aside from this well-known linear form, DNA can be precisely engineered to fold into 3D nanostructures with enhanced stability. STAMP leverages these two important properties of DNA – a large capacity to store information as well as its programmability to fold and unfold into different structures – to engineer convertible barcodes. These STAMP barcodes can be used to measure billions of protein markers in a single test and identify the specific locations of these protein markers in cells.

“To label diverse protein markers in cells, STAMP uses DNA barcodes which are folded as compact nanostructures. These 3D barcodes achieve a high labelling efficiency and remain stable against biological degradation. Each 3D barcode is further given a localisation label to encode protein marker location and distribution within the cell,” explained Mr Noah Sundah, a doctoral student from NUS iHealthtech as well as NUS Biomedical Engineering, and first author of the study.

“To perform analysis, these 3D barcodes are unfolded on-demand through heating to release a pool of linear DNA, which can be easily analysed using established technologies such as PCR and DNA sequencing. In this way, the expression of a very large number of protein markers and their distribution in cells can be sensitively measured in a single test,” Mr Sundah added.

To facilitate clinical processing and measurement, the research team implemented the STAMP technology on a small microfluidic chip that is about half the size of a credit card. Test results could be generated from small amounts of clinical samples, and each test is estimated to cost S$50. 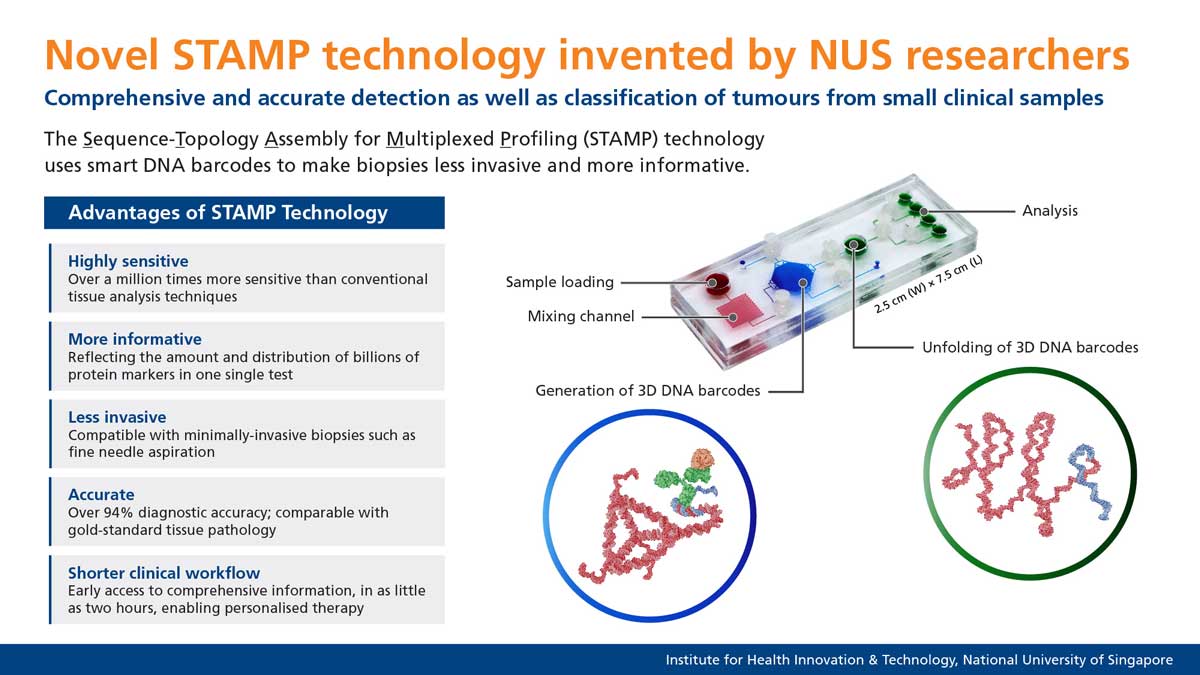 To validate STAMP’s performance, the research team conducted a clinical study involving 69 breast cancer patients. FNA biopsies were collected from each patient and analysed using STAMP. For comparison, gold-standard pathology analysis was performed on post-surgery tissues for all patients.

The STAMP analysis of the FNA samples demonstrated a high level of accuracy of more than 94 per cent for cancer diagnosis and subtyping, making it equally accurate as pathology analysis of surgical tissues. Importantly, based on its comprehensive protein marker analysis, STAMP was also able to accurately identify disease aggressiveness from the scarce biopsy samples.

A provisional patent has been filed for STAMP. Asst Prof Shao and her team are currently in discussions with industry partners to further develop and commercialise this technology. The technology is expected to reach the market within the next five years.

Moving forward, the research team hopes to expand the applications of STAMP to other types of cancer, such as brain, lung, and gastric cancer, as well as validate the technology in other samples, such as blood and ascites.

A new type of intelligent material