It is running out of steam 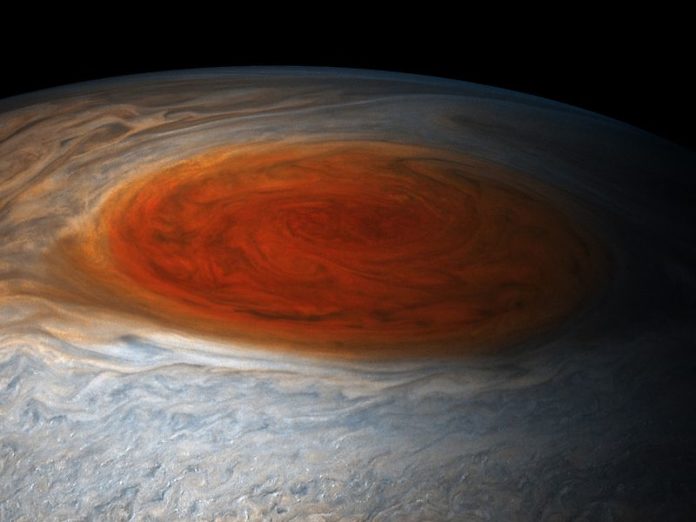 Jupiter’s great red spot is the most noticeable feature on Jupiter’s surface. A gigantic storm twice as big as Earth, the spot was first observed 300 years ago – and may have been churning long before that.

The spot is over 40,000 km in diameter, and could be seen easily with a telescope from your backyard. Even though the Great Red Spot is large now, it is slowly shrinking in size.

Persisted for centuries, the spot could disappear forever in as little as 20 years, predicted scientists. In a report from Space.com, astronomers from around the world say they’ve documented an uptick in what they describe as ‘blades’ or ‘wings’ spiraling out from a massive storm on Jupiter’s surface known as the ‘Great Red Spot.’

While the exact reason for the unusual flaking is unclear, some astronomers have posited that plumes are a side-effect of the storm’s slow and steady decline.

It’s unclear what is causing the phenomenon, but according to NASA scientist Glenn Orton who spoke to Space.com in an email, some say it could be a collision between the spot and a vortex to the south.

Orton said, “Some observers implied that these [blades] were induced by the arrival of vortices in a jet just south of the GRS moving from east to west that enters a dark area surrounding it that is characterized by deeper clouds, known as the ‘Red Spot Hollow’.

In an interview with Business Insider last year, Orton said the storm has shrunk by as much as 17 degrees since the 1800s when the Great Red Spot could have spanned as many as 35,000 miles or four times the diameter of Earth.

Currently, the spot is about 1.3 times the size of Earth. And scientists will soon have an opportunity to examine the phenomenon further during an upcoming fly-by from NASA’s space probe, Juno, in July.

Orton said, “While the spot’s unique location has kept the storm raging for what researchers believe could be centuries, even the mightiest of storms in our solar system are bound to run out of gas eventually.”

Rare phenomenon: Four planets will line up in the sky this month