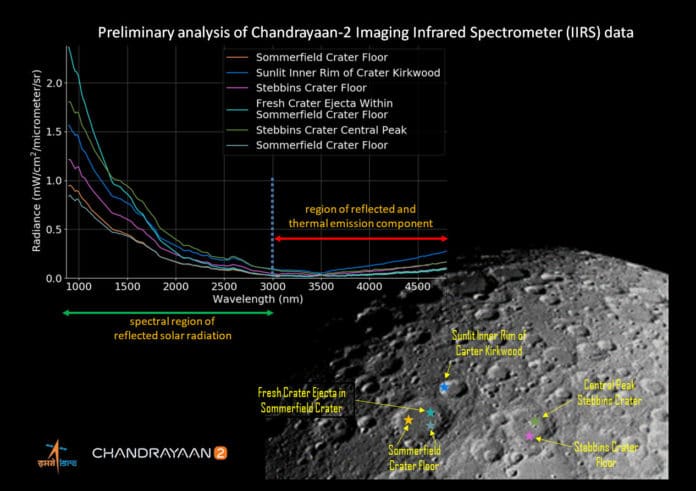 Recently, ISRO took to Twitter and shared the first-ever image illuminated images of the lunar surface captured by Chandrayaan-2’s Imaging Infrared Spectrometer (IIRS) payload on Monday. The IIRS payload has started spectroscopic studies on the surface of the Moon.

IIRS is designed to measure reflected sunlight from the lunar surface in narrow and contiguous spectral channels. IIRS captured the image from the northern hemisphere that shows several craters including Sommerfield, Kirkwood, and Stebbins.

Preliminary analysis suggests that IIRS could successfully measure the variations in the reflected solar radiation that bounces off the lunar surface from different kinds of surface types, namely, crater central peaks, crater floors, very fresh reworked ejecta associated with small craterlets within the crater floor of a large crater and also the sun-illuminated inner rims of craters.

The variations in the spectral radiance are primarily due to the mineralogical/compositional variations that exist in the lunar surface and also due to the effect of space weathering.

#ISRO
See the first illuminated image of the lunar surface acquired by #Chandrayaan2’s IIRS payload. IIRS is designed to measure reflected sunlight from the lunar surface in narrow and contiguous spectral channels.

DON'T MISSAI created by Dodo analyzed 300,000 recipes to create a pizza transcending individual tastes
UP NEXTFish species in amazon are so tough to thwart piranha attack

Even molecules are torn to shreds.
Read more
Space