How Vitamin D deficiency can cause heart failure?

Vitamin D deficiency is an independent risk factor for heart failure, at least in part, through induction of myocardial insulin resistance. 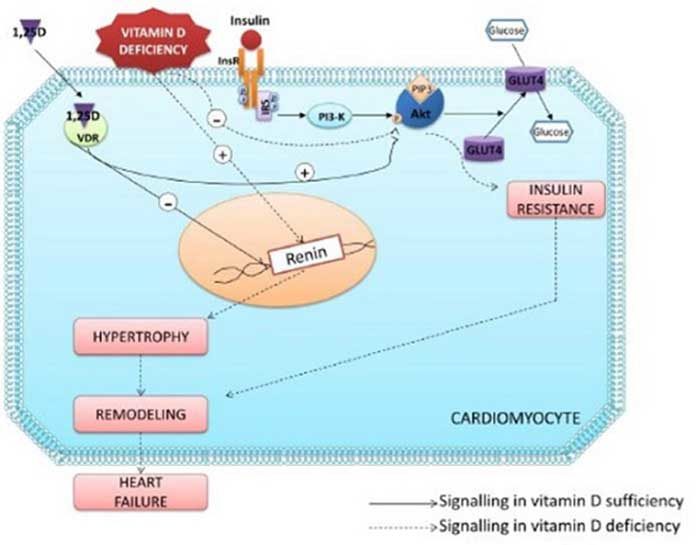 Vitamin D is essential for strong bones, because it helps the body use calcium from the diet. Traditionally, vitamin D deficiency has been associated with rickets, a disease in which the bone tissue doesn’t properly mineralize, leading to soft bones and skeletal deformities. But increasingly, research is revealing the importance of vitamin D in protecting against a host of health problems.

Now, Indian scientists suggest that vitamin D deficiency also links to heart failure possibly through insulin resistance. In a new study, scientists have found that cardiac insulin leads to the functional deterioration of heart in animals with low vitamin D levels.
The utilization of glucose and fatty acids – key fuels for energy generation in the heart – is adversely affected due to insulin resistance in heart cells. Insulin plays a critical role in the regulation of cellular metabolism in many tissues in the body.

For this study, scientists conducted an experiment with rats for 20 weeks, where they manipulated diets of animals and divided them into three groups – one with adequate vitamin D, the second set had vitamin D deficiency, while the third group was fed with high fat and high fructose diet.

At the end of the experiment, scientists found that the hearts of vitamin D deficient animals were failing. Also, there was a greater expression of genes involved in the enlargement of cardiac muscles.

When scientists measured heart wall thicknesses, chamber internal diameters and contracting capacity of heart, the left ventricular posterior wall thickness was found to be increased in rats with vitamin D deficiency. This happens when cardiac workload increases and turns pathological if no remedial measures are taken, finally progressing to heart failure. In such a condition, the pumping action of the heart can no longer meet the metabolic demands of the body.

Dr. Sanjay Kumar Banerjee, senior scientist at the Faridabad-based Translational Health Science and Technology Institute (THSTI) said, “We have shown the link between vitamin D deficiency and cardiac dysfunction and how it may lead to heart failure. Vitamin D and its signaling modulate myocardial insulin sensitivity, the insufficiency of which induces impaired glucose utilization, remodeling response, and heart failure.

Dr. Sanjay Kumar Banerjee, senior scientist at the Faridabad-based Translational Health Science and Technology Institute (THSTI), who led the research team, while speaking to India Science Wire said, “We have shown the link between vitamin D deficiency and cardiac dysfunction and how it may lead to heart failure. Vitamin D and its signaling modulate myocardial insulin sensitivity, the insufficiency of which induces impaired glucose utilization, remodeling response, and heart failure.”

The new findings have both public health and therapeutic implications. The insights gained on how vitamin D signaling affects myocardial insulin sensitivity may help scientists design new drugs for management of heart failure by targeting the activation of vitamin D receptor.

Many things about Novel Coronavirus are spreading rapidly through social media, WhatsApp, and the Internet. Some of these could be true, but...
Read more
Health

CCMB may soon come up with diagnostic kits for COVID-19

To combat the COVID-19 pandemic, the World Health Organisation (WHO) insists that widescale "testing, testing, and testing" is the key as early...
Read more
Health

The COVID-19 pandemic is throwing up unique challenges for health systems. It presents particular challenges for patients who receive regular hemodialysis. These...
Read more
Technology

The heart rate is one of the ‘vital signs’ or the crucial indicators of health in the human body. It measures the...
Read more
Health

A prototype polymer patch that does the same job as crucial aspects of heart tissue.
Read more