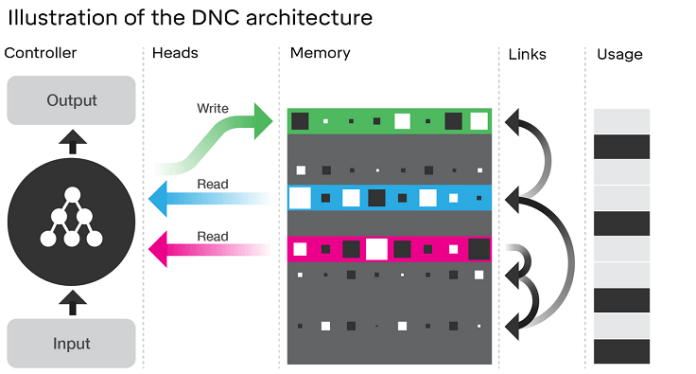 The DeepMind artificial intelligence (AI) developed by Google’s parent company Alphabet now developed a new system. This new system can build its own memory. The system is called as Differential Neural Computer (DNC). DNC is a combination of the neural network with the vast data storage of conventional computers, and the AI.

The DNC efficiently combines external memory with the neural network approach to AI. A large number of interconnected nodes work separately to stimulate brain inside it.

The AI inside DNC continuously optimises its results by comparing with desired and correct ones. It is also able to get more accurate by discovering how to use its memory data banks at the same time.

It’s functioning like a human brain by taking data from memory and discovering new information. The difference between DNC and smartphone mapping app is that the DNC do not pull the information out of a pre-programmed timetable. It develops its own information and juggles huge data in its memory.

According to scientists, this new system will reduce the responses from prior experiences. It wound not need to have learned every possible answer beforehand. Means the system points to a future where artificial intelligence could answer questions on new topics.

Developers said, “Of course, that’s how DeepMind was able to beat human champions at Go- by studying millions of Go moves. But by adding external memory, DNCs are able to take on much more complex tasks and work out better overall strategies.”

It is like a conventional computer that uses its memory to control and represent complex data structures. But, like a neural network, it can learn to do so from data.

Researchers said, “With the advances DeepMind, we’re another step forward to producing a computer that can reason independently.”

Scientists have explained it by example: a public transit system, like the London Underground. Once it’s learned the basics, the DNC can figure out more complex relationships and routes without any extra help, relying on what it’s already got in its memory banks.

Google achieved the ‘quantum supremacy’ with its Sycamore