Why our galaxy, the Milky Way, is warped?

It may be due to Galactic collision. 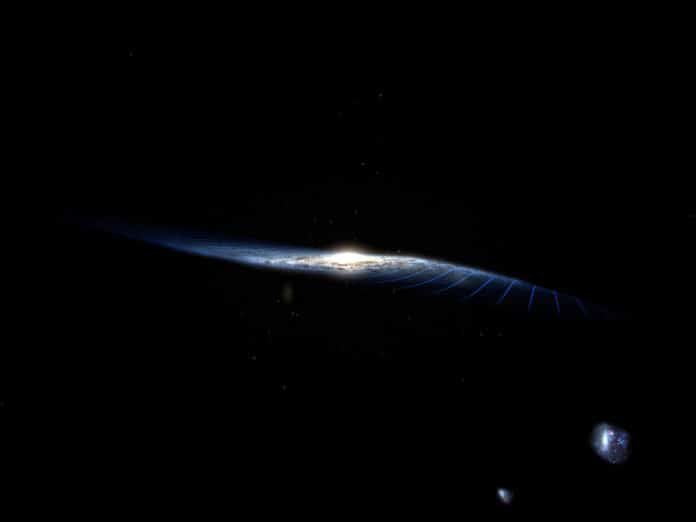 Accurately, the study of galactic warps and their dynamic nature could reveal vital information on the formation history of galaxies and the mass distribution of their haloes.

Our Milky Way presents a unique case study for galactic warps, thanks to detailed knowledge of its stellar distribution and kinematics.

A group of researchers utilizing information from the second Gaia data release has now affirmed past indications that this warp isn’t static yet changes its orientation after some time. Astronomers call this phenomenon precession, and it could be compared to the wobble of a spinning top as its axis rotates.

By using a simple model of how the warp’s orientation is changing with time, scientists measured the precession rate of the Milky Way’s warp using 12 million giant stars from Gaia Data Release. They found that it is precessing at 10.86 ± 0.03 (statistical) ± 3.20 (systematic) km s−1 kpc−1 in the direction of Galactic rotation, about one-third the angular rotation velocity at the Sun’s position in the Galaxy.

Eloisa Poggio of the Turin Astrophysical Observatory, Italy, lead author of the study, said, “We measured the speed of the warp by comparing the data with our models. Based on the obtained velocity, the warp would complete one rotation around the center of the Milky Way in 600 to 700 million years. That’s much faster than what we expected based on predictions from other models, such as those looking at the effects of the non-spherical halo.”

Ronald Drimmel, a research astronomer at the Turin Astrophysical Observatory and co-author of the paper, said, “It’s like having a car and trying to measure the velocity and direction of travel of this car over a concise period and then, based on those values, trying to model the past and future trajectory of the car. If we make such measurements for many cars, we could model the flow of traffic. Similarly, by measuring the apparent motions of millions of stars across the sky, we can model large scale processes such as the motion of the warp.”

However, astronomers are yet to know which galaxy might be causing the ripple nor when the collision started. On of the guessing is Sagittarius, a dwarf galaxy orbiting the Milky Way, which is believed to have burst through the Milky Way’s galactic disc several times in the past. According to astronomers, Sagittarius will be gradually absorbed by the Milky Way, a process that is already underway.

ESA’s Gaia deputy project scientist Jos de Bruijne said, “With Gaia, for the first time, we have a large amount of data on a vast amount stars, the motion of which is measured so precisely that we can try to understand the large scale motions of the galaxy and model its formation history. This is something unique. This is the Gaia revolution.”

The study is published in the journal Nature Astronomy.