Queen’s University Belfast scientist has led an international team to the ground-breaking discovery of why the Sun’s magnetic waves strengthen and grow as they emerge from its surface. 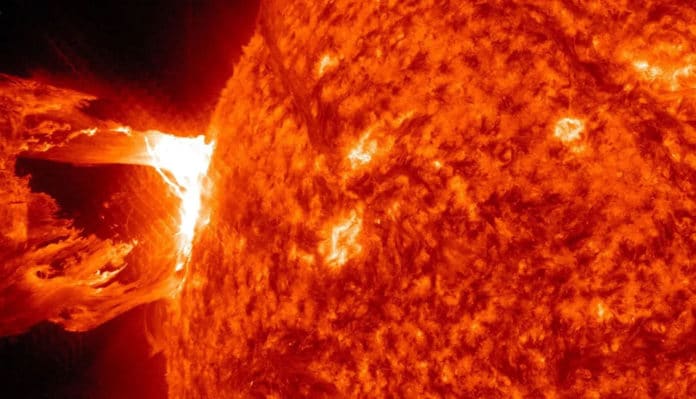 Why the Sun’s magnetic waves strengthen and grow as they emerge from its surface?

More than six decades of observation of the sun has suggested that the magnetic waves leave the interior of the Sun they grow in strength. But, why this was the case- remains unknown.

In a new study, a team of international scientists to crack this mystery. They aim to solve the mystery of how the corona of the Sun maintains its multi-million-degree temperatures.

Scientists have acknowledged for quite a while that magnetic waves channel energy from the Sun’s vast interior energy reservoir, which is powered by nuclear fusion, up into the external areas of its atmosphere. In this manner, seeing how the wave movement is produced and spread throughout the Sun is of colossal significance to analysts.

Dr. David Jess from the School of Mathematics and Physics at Queen’s led the team of experts said, “This new understanding of wave motion may help scientists uncover the missing piece in the puzzle of why the outer layers of the Sun are hotter than its surface, despite being further from the heat source.”

“By breaking the Sun’s light up into its basic colours, we were able to examine the behaviour of certain elements from the periodic table within its atmosphere, including silicon (formed close to the Sun’s surface), calcium and helium (formed in the chromosphere where the wave amplification is most apparent).”

“The variations in the elements allowed the speeds of the Sun’s plasma to be uncovered. The timescales over which they evolve were benchmarked, which allowed the wave frequencies of the Sun to be recorded. This is similar to how a complex musical ensemble is deconstructed into basic notes and frequencies by visualizing its musical score.”

Scientists also used computer simulations for analyzing the data and found that the wave amplification process can be attributed to the formation of an ‘acoustic resonator’, where significant changes in temperature between the surface of the Sun and its outer corona create boundaries that are partially reflective and act to trap the waves, allowing them to intensify and dramatically grow in strength. What’s more, the thickness of the resonance cavity -the distance between the significant temperature changes – is one of the main factors governing the characteristics of the detected wave motion.

Dr. Jess comments: “The effect that we have found through the research is similar to how an acoustic guitar changes the sound it emits through the shape of its hollow body. If we think of this analogy, we can see how the waves captured in the Sun can grow and change as they exit its surface and move towards the outer layers and exterior.”

Dr. Ben Snow, from the University of Exeter and a co-author of the study, said: “This new research opens the door to providing a new understanding of the mystery surrounding the Sun’s magnetic waves. This is a crucial step towards explaining the coronal heating problem – where the temperature a few thousand km from the surface – is hotter than the heat source itself.”