Astronomers detected a new signal for a neutron star collision

This source, called XT2, is located in the Chandra Deep Field-South, the deepest X-ray image ever obtained. 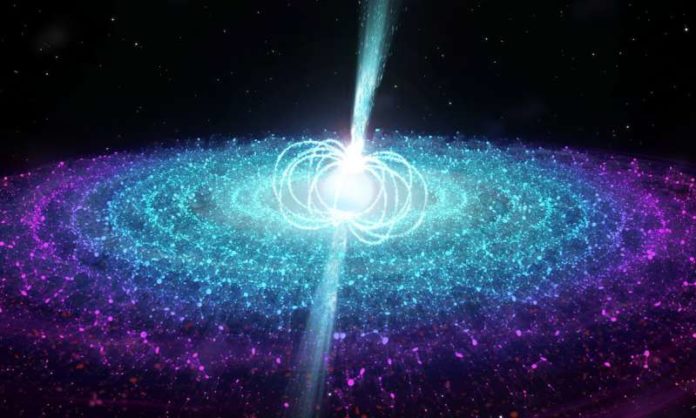 A bright burst of X-rays in this source, dubbed XT2 could offer astronomers another way to track down neutron star mergers as well new information about their interiors.

Yongquan Xue, professor at the University of Science and Technology of China (USTC) and lead author of the paper said, “We’ve found a completely new way to spot a neutron-star merger. The behavior of this X-ray source matches what one of our team members predicted for these events.”

XT2 suddenly appeared and then faded away after about seven hours. The source is located in a region of the sky known as the Chandra Deep Field-South, which is the focus of the deepest X-ray image ever taken, containing almost 12 weeks of Chandra observing time taken at various intervals over nearly 16 and a half years. XT2 appeared on March 22, 2015, and was discovered later in the analysis of archival data.

Astronomers also identified the likely origin of XT2 by studying how its X-ray light varied with time and comparing this behavior with predictions made in 2013 by Bing Zhang, professor and associate dean for research at the University of Nevada, Las Vegas, and an author of the paper.

he X-rays showed a characteristic signature that matched those predicted for a newly-formed magnetar — a neutron star spinning around hundreds of times per second and possessing a tremendously strong magnetic field about a quadrillion times that of Earth’s.

According to astronomers, the magnetar lost energy in the form of an X-ray-emitting wind, slowing down its rate of spin as the source faded. The amount of X-ray emission stayed roughly constant in X-ray brightness for about 30 minutes, then decreased in brightness by more than a factor of 300 over 6.5 hours before becoming undetectable. This showed that the neutron star merger produced a new, larger neutron star and not a black hole.

Zhang said, “This result is important because it gives us a chance to learn about the interior of neutron stars, objects that are so dense that their properties could never be replicated on Earth. We can’t throw neutron stars together in a lab to see what happens, so we have to wait until the Universe does it for us. If two neutron stars can collide and a heavy neutron star survives, then this tells us that their structure is relatively stiff and resilient.”

Is dark energy just an illusion?