The present study quantifies the magnitude of Arctic sea-ice loss in the boreal summer. 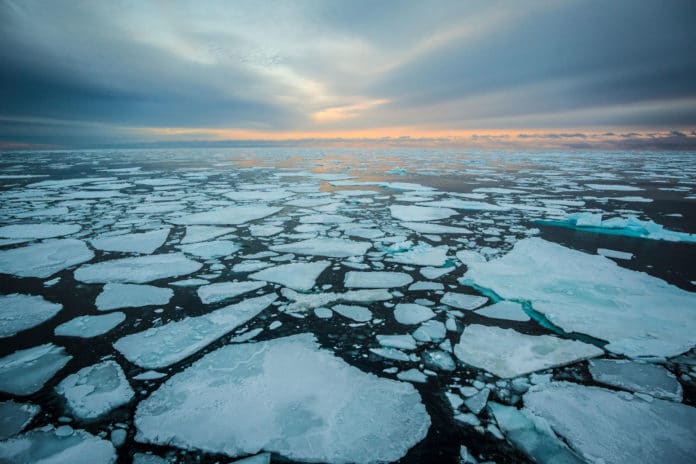 A recent study by the National Centre for Polar and Ocean Research (NCPOR), Goa, India, has pointed out that the Arctic sea ice is melting at an alarming rate, especially during boreal or northern hemisphere summer.

The study published in the journal Heliyon highlights the increasing decline of the Arctic sea ice due to climate change. It reports that the September sea ice extent declined to 4.71 million square kilometers in 2018, its lowest in the past four decades.

The study to measure the extent of Arctic-sea-ice-loss was led by Dr. Avinash Kumar and his team of scientists comprising Dr. Juhi Yadav and Dr. Rahul Mohan, from NCPOR.

“Seasonal Sea ice extent of 2018 recorded minimum between September 19 and 23. Before September 19, 2018, sea ice extent had declined at a rate of nearly 14 thousand km2 per day, which was significantly faster than in most previous years”, observed Dr. Kumar.

The study also showed that September of 2018 was the third warmest on record, with temperature differences above the Arctic Ocean (~3.5°C) slightly higher than that of the Arctic land (~2.8°C).

The decline in sea ice can lead to accelerated global warming and climate changes. “The faster loss of sea-ice for the whole Arctic Ocean during September demonstrates that there are substantial variations in surface air temperature, and there is a correspondence between the fluctuations in surface air temperature in the Arctic and global regions,” added Dr. Avinash Kumar.

The Arctic is warming twice as fast as that the rest of the globe, a phenomenon known as arctic amplification. Arctic sea ice loss is attributed to several factors, such as rising global temperatures. The study suggests that due to more open seas in winters, sea ice growth is delayed, leading to a disproportionate loss of sea ice occurring during summer.

Researchers obtained data of arctic ice extent, thickness, and volume from 1979-2018 from globally-available satellite data and applied modeling techniques. They also studied its correlations with atmospheric and surface temperatures and sea pressure. As a result, they were able to see how ice in the arctic region has changed over the last four decades.

It also helped them to predict the possible sea ice scenario in the coming years. The group is now planning to expand their work to study how sea ice melting and intrusion of warm ocean waters are related.

Earth completed its rotation in less than 24 hours

How do penguins become oceanic birds?

Astronomers identified the most distant globular clusters ever discovered