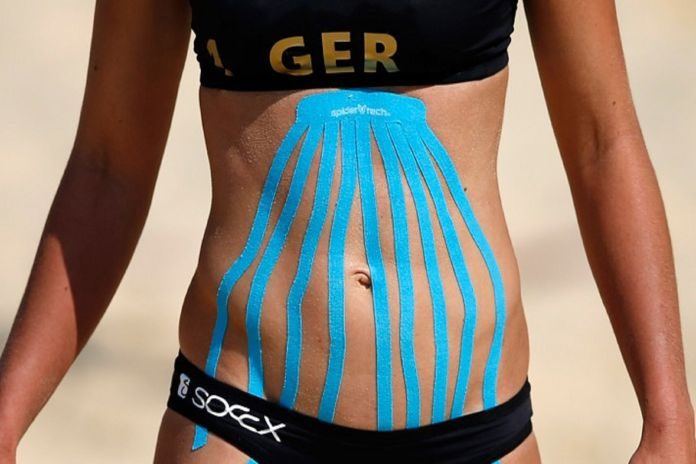 As we all know, Olympic 2016 has the opening ceremony on 6th August 2016. There are lots of different interesting facts to know about. Previously, you may have watch Olympic 2008 or 2012. You may have seen Olympic athletes regularly wears a unique kind of tape with colorful strips.

But have you ever think about it? Have you ever thought, why Olympic athlete’s body covered with this tape? So, what is it and why is it there? Let’s know about it.

The tape is nothing but the something called kinesiology tape or Kinesio tape. This Kinesio Tex tape is latex-free hypoallergenic cotton fiber tape. This tape was developed by Japanese chiropractor in 1979. It comes with an acrylic heat support that stretches only 40%- 60% along its longitudinal axis.

According to Kinesio’s website, this tape relieves discomfort and facilitates lymphatic drainage by microscopically lifting the skin. On skin, the tape pulls the upper layers of skin and creates more space between the dermis and muscle. The space created relieves pressure on the lymph channels in the area between the muscle and the dermis. Creating more space for lymph flow causes better lymph drainage through an affected area. This space also shields different nerve receptors that send specific information to the brain.

When the space between the dermis and the muscle is condensed, like during injury, these nerve receptors condensed and transfer information to the brain. The information is related to like continuous touch, light touch, cold, pain, pressure, and heat. This information makes the brain transfer absolute signals to the body on how to react to particular stimuli. Kinesio Tape filters the information that these receptors send to the brain and causes a less reactive response in the body. Thus, it allows the body to work in a more normal manner and eliminates some of the roadblocks that normally slow down the healing process.

Most of the athletes might sometimes depend on athletic tape for support or to limit certain movement. According to British Journal of Sports Medicine, Kinesio taping is superior to minimal intervention for pain relief.

And, Lots of Olympic athletes love this stuff. For example, Lance Armstrong and David Beckham used the adhesive during their careers. Although, that choice may be more logical than it seems, even if there’s no actual physical benefit to the taping. But even if there’s no performance boost whatsoever from the tape, it could still be worth wearing if an athlete thinks it helps them.

Steve Harridge, human and applied physiology professor said, “The fact that athletes think it’s going to do them some good can help in a psychological way.”

This hormone causes women to experience more pain than men

How our brain turns pain up or down?